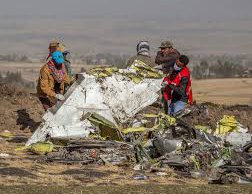 The aircraft manufacturer Boeing faces further questions over the safety of its 737 Max 8 jets as Ethiopian Airlines joined carriers in China and elsewhere in grounding the planes after their second fatal crash in months.

The cockpit voice recorder and flight data recorder have been recovered from the wreckage of Ethiopian Airlines flight ET302, which crashed on Sunday killing all 157 people onboard.

Investigators will hope the black box evidence can explain why the plane crashed six minutes after takeoff from Addis Ababa en route to Nairobi, ploughing into a field near Tulu Fara village outside the town of Bishoftu, 40 miles (65km) south-east of the Ethiopian capital.

Witnesses on the ground have given conflicting accounts of the plane’s final moments. One man who spoke to the BBC said the aircraft fell sharply with no apparent damage prior to impact. However, Malka Galato, a farmer on whose land the plane crashed, told Reuters he saw “papers falling off” and “smoke and sparks coming from the back” as it turned close to the ground.

Boeing’s shares fell 13% within minutes of Wall Street opening on Monday morning and ended the day down just over 5%.

The US Federal Aviation Administration issued a “continued airworthiness notification” for the Max on Monday evening. However, it later issued a notice to international carriers saying it would mandate forthcoming “design changes” to the aircraft from Boeing by April.

The disaster was the second involving the 737 Max 8 in the past five months. In October a Lion Air plane crashed into the sea off the Indonesian capital, Jakarta, killing all 189 people onboard.

Aviation experts, Chinese regulators, and concerned passengers highlighted the fact the Ethiopian Airlines and Lion Air crashes involved models that had been in service for only a short time.

Mary Schiavo, a former inspector general of the US transportation department, told CNN the latest disaster was “highly suspicious” and “rings alarm bells in the aviation industry, because that just doesn’t happen”. She said Boeing should “take the lead” in telling airlines to ground the plane.

US carriers that operate the aircraft, including Southwest and American Airlines, attempted to reassure customers worried by the crash.

Provisional flight data from the tracking website FlightRadar24 suggested ET302 climbed erratically in the short time it was in the air. The pilot of the plane, as in the Lion Air case, reported difficulties to air traffic controllers quickly after takeoff and requested permission to turn back, Ethiopian Airlines said.

The airline, Africa’s largest carrier, announced it would be taking its 737 Max planes out of service. Earlier on Monday, China’s civil aviation administration ordered the country’s airlines to ground the jets “in view of the fact that the two air crashes were newly delivered Boeing 737 [Max] 8 aircraft” and had “certain similarities”.

Approximately 60 of the 737 Max planes have been delivered to about a dozen Chinese airlines since the aircraft was released.

Cayman Airways announced it would also ground the planes while an investigation into the crash took place. The Cayman Airways president and chief executive, Fabian Whorms, said the airline was “putting the safety of our passengers and crew first”.

India’s aviation regulator issued new rules on Monday stating only pilots with more than 1,000 hours of training could operate the Boeing 737 Max 8.

Passengers on British Airways flights in Africa could be flying on the same model, with the first of eight new 737 Max 8 planes having come into service last month.

Comair, which operates British Airways flights in Africa, announced on Monday it has decided to pause flying the first of eight new 737 Max 8 planes it has ordered, that came into service last month.

Although BA does not operate Max 8s in its fleet, it franchises Comair to fly from Johannesburg to destinations around southern Africa, including Zimbabwe and Mozambique. 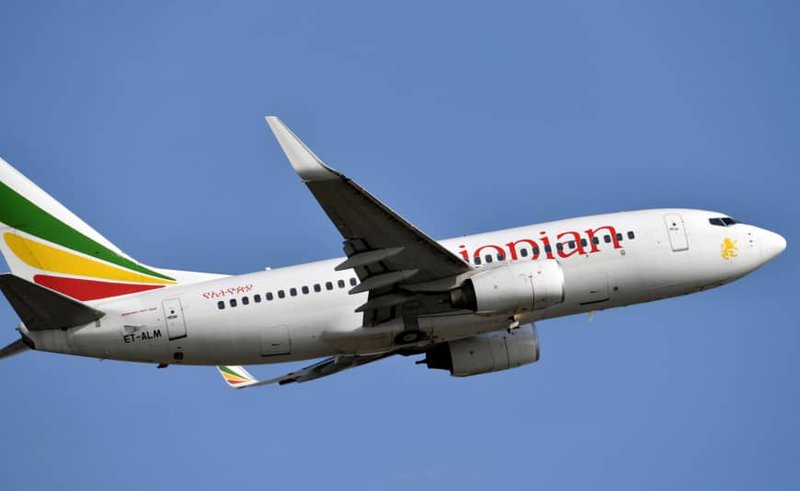 The holiday operator Tui Airways ordered 32 Max aircraft as part of a fleet overhaul and took delivery of its first Max 8 in December. Tui was the first UK-registered airline to receive one of the new Boeings and it plans to roll out its orders over the next five years.

Several airlines said they did not intend to ground their flights, including Fiji Airways which said it had “full confidence in the airworthiness of our fleet”.

Singapore Airlines, which has five Boeing 737 Max 8 aircraft in the fleet of its regional carrier SilkAir, and a further 31 on firm order, said it had not grounded the aircraft and was “continuing to monitor the situation closely”.

Other airlines that have ordered the same model but are yet to receive delivery of them, including Virgin Australia and Air Niugini, said they had no plans to alter their order and it was too early to comment at this stage.

Boeing said it was cancelling an event scheduled for Wednesday in Seattle to showcase its new 777X airliner.

The victims of the Ethiopian Airlines crash came from at least 32 countries. The largest number were from Kenya. Among the dead were 22 UN staff, many heading for an assembly of the UN Environment Program in Nairobi.