6 Dead, 32 Injured As Foot Over Bridge Collapses In Mumbai

6 Dead, 32 Injured As Foot Over Bridge Collapses In Mumbai 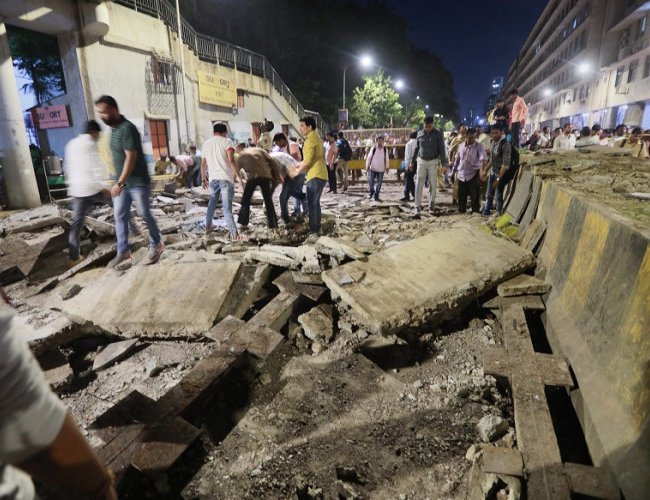 Six people were killed and 32 injured as a major portion of a foot overbridge near the Chhatrapati Shivaji Maharaj Terminus (CSMT) railway station in Mumbai collapsed on Thursday evening.

An eyewitness said when the bridge collapsed, there was a red light at the nearby signal, and that is why the death toll was not more. Another eyewitness said the overbridge was being used despite repairs being carried out this morning.

The bridge collapse, on the busy Dadabhai Naoroji Road, was the third in less than 18 months in the maximum city. On July 3, 2018, a pedestrian pathway of Gokhale Bridge over Andheri railway station in suburban Mumbai had collapsed, killing two and injuring five others.

Nine months before that, in 2017, 23 people were killed in a stampede when the Elphinstone Bridge had collapsed.

Thursday's collapse happened around 7.30 pm when a major portion of the bridge caved in, officials said. Some motorists who were passing beneath the bridge when it came down, were among those injured.

Rescue workers at the site of the foot overbridge collapse near CSMT station collapsed in south Mumbai on Thursday.

Senior police officials, the fire brigade and a team of the National Disaster Response Force were rushed to the site of the accident. The pedestrian bridge, which was demolished after the collapse, connected the railway station to the Azad Maidan police station, the Times of India building and a school.

Apart from public and private ambulances, people at the spot also helped in rescue operations and were seen carrying the injured to the hospitals.

A 45-member team from the National Disaster Response Force and the Mumbai Fire Brigade were also sent. Rescue operations went on for over an hour as many were trapped under the debris, officials said.

Japan To Lift State Of Emergency For All Areas By NEW SPOTLIGHT ONLINE 1 day, 16 hours ago

WHO Assembly Adopts Resolution For Inquiry By NEW SPOTLIGHT ONLINE 6 days, 16 hours ago