The outfit’s political line/strategy is ‘new people’s revolt (NPR)’ and its objective is to replace the parliamentary supremacy with “people’s government”. 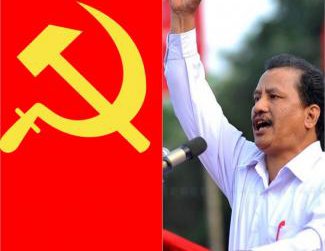 In response to a series of bomb blasts and kidnapping of a member of legislative assembly in Bajhang district recently, the Nepal government on March 12, 2019, proscribed the Netra Bikram Chand-led Communist Party of Nepal (CPN) by branding the same as a criminal group. The ban was imposed just 16 days before the second investment summit, scheduled for March 29-30 by sending a message to the domestic and external investors that Nepal is safe for investment. The government took the decision based on security agencies reports which found that the CPN has stepped up its activities and moved beyond its “donation drive”. In November 2018, the CPN top leaders had rejected dialogue offer of the High-Level Political Talks team formed under lawmaker Som Prasad Pandey. Earlier, to send a positive message to global investors, on March 8, the government signed an 11-point agreement with Coordinator of Alliance for Independent Madhes (AIM) and Free Madhes campaigner CK (Chandra Kant) Raut.

The outfit’s political line/strategy is ‘new people’s revolt (NPR)’ and its objective is to replace the parliamentary supremacy with “people’s government”. The Party opposes the new constitution of Nepal. In this regard, the part’s tactics will be unleashing the NPR to take the revolution further using the “people’s war” as a foundation”. The outfit’s political document emphasizes going for another armed rebellion with the help of rural peasants and the urban working class.

However, there are occasions when the CPN-Chand leaders talk about complete or “total revolution”, which is yet to be clarified by the party.

The party claims running a ‘parallel government’ in some undisclosed areas of Nepal. In a video message, Chand said the CPN has been in the process of forming a strong “People’s Liberation Army”. The party has also warned to demolish the state and establish a new state structure.

It may be recalled that Chand rejected negotiation with the government panel, which was formed to negotiate with the rebel groups of Nepal in December 2018. The panel reportedly submitted its report to the government by noting that the government should deal with the CPN separately.

The CPN has formed three military divisions/commands and 17 bureaus both for political and military campaigning. The party claims that it has 11,000 combatants including around 7,000 ex-Maoist combatants, who were disqualified by the UN during the peace process between (2006-2013). Following are the commands:

There are 17 bureaus under these three commands. The NCP has divided 75 Nepal districts into 17 bureaus. These bureaus are in charge of some districts. Following are the bureaus and their operational jurisdictions:

Support base and geographical reach

School and college students, unemployed youths, ex-Maoist combatants, ethnic and marginalized groups, who are basically dissatisfied with the new constitution, form the major support base of this party.

The outfit has a pan-Nepal presence. However, out of 75 districts of Nepal, it has strong presence and support base in Dang, Pyuthan, Rolpa, Rukum, Salyan, Nawalparasi, Saptari, Kathmandu, Achham, Kanchanpur, Nuwakot, Gorkha, Kaski, Myagdi, Chitwan, Rolpa-Thabang region, Dhankuta, Bajura, Rautahat, Bajhang, Kavre and Morang-north region, which is considered as its eastern strategic base area.

More than 90 per cent of the total funds are generated locally and through extortion. It is believed that some NGOs operating in the mid-western and upper Himalayan region pay security money to the outfit to ensure their smooth operations.

The outfit reportedly has around 700 old M-16 rifles, light machine guns, mining explosives and improvised explosives devices (IEDs). Some of its cadres are trained in producing pressure cooker, cylinder bomb and socket bombs. Nepal Police sources say that the NCP used weapons, which were looted from the Rolpa barracks of the Nepali Army during the conflict in 2001.

It is suspected that the CPN has fraternal and ideological linages with the Communist Party of India (Maoist).

March 8, 2019: The CPN claimed responsibility of bomb explosion in Basundhara, Kathmandu. No casualties were reported. However, one vehicle and building was damaged in the blast. In a separate incident, NCP cadres kidnapped a provincial assembly lawmaker Debaki Malla for seven hours in Bajhang district in Province 7.

February 22, 2019: One person died and two others injured during a series of arson attacks on Ncell infrastructure in various districts across the nation, including blasts near the gate of Ncell head office in Nakkhu, Lalitpur.

February 8, 2019: The CPN exploded three improvised explosive devices near the powerhouse of under construction Arun III Hydropower project. In a separate incident, millions of students—from pre-primary to university level—were affected as most of the academic institutions remained closed due to a strike called by the student wing of the CPN. This was the sixth strike in the current academic session by the union.

April 30, 2018- The CPN detonated an IED at the office of Arun-III Hydropower Project in Sankhuwasabha district. A few months earlier, the outfit had twice detonated IEDs at the project’s powerhouse at Diding village in Chinchila Rural Municipality.

October 23, 2017: The CPN strongly opposed the then parliamentary and provincial elections scheduled on November 26 and December 7.

Courtesy: Society For The Study of Peace and Conflict (SSPC)

He is Research Fellow at Institute for Defence Studies and Analyses, New Delhi 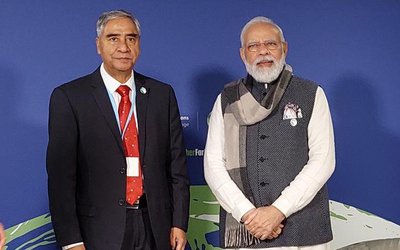 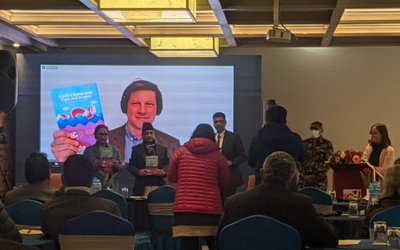 Book : Alternative Development Paradigm By A Correspondent 5 months ago

BOOK On Indian Philosophy By A Correspondent 7 months ago