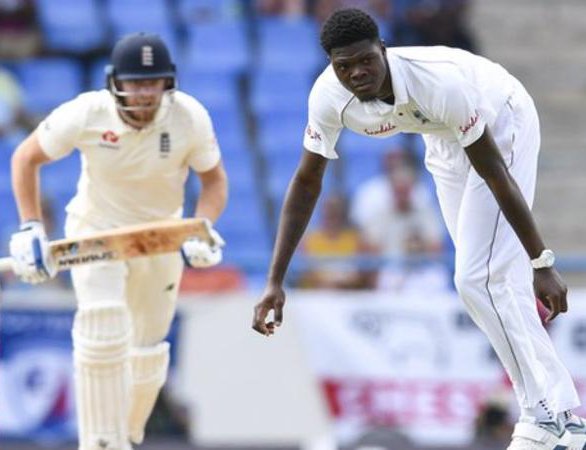 Joseph, 22, took six wickets for 12 runs in 3.4 overs to bowl Mumbai Indians to a 40-run victory over Sunrisers Hyderabad.

He bowled opener David Warner with his first delivery before going on to beat Sohail Tanvir's previous mark of 6-14.

"It's a dream start, can't get better than this," said Joseph.

Joseph joined Mumbai on 28 March after New Zealand's Adam Milne was ruled out of the competition because of a heel injury and was only playing in place of absent Sri Lanka paceman Lasith Malinga.

"I just wanted to bowl to the plans," added Joseph. "When they said I was playing, I decided to keep it simple and back myself."

Joseph then removed Vijay Shankar before returning to strike twice in successive deliveries in the 16th over, dismissing Deepak Hooda and Rashid Khan.

In his next over, Joseph bowled captain Bhuvneshwar Kumar before having last man Siddarth Kaul caught behind as the Sunrisers were bowled out for 96.

Australia leg-spinner Adam Zampa is the only other bowler to take six wickets in IPL history, taking 6-19 for Rising Pune Supergiant in their defeat by Hyderabad in 2016.