Tornado Was Responsible For Devastation In Bara And Parasa: DoHM

Led by Madan Lal Shrestha, former director general of DoHM and academician of Nepal Academy of Science Technology, a group of scientists found that the storm was tornado. 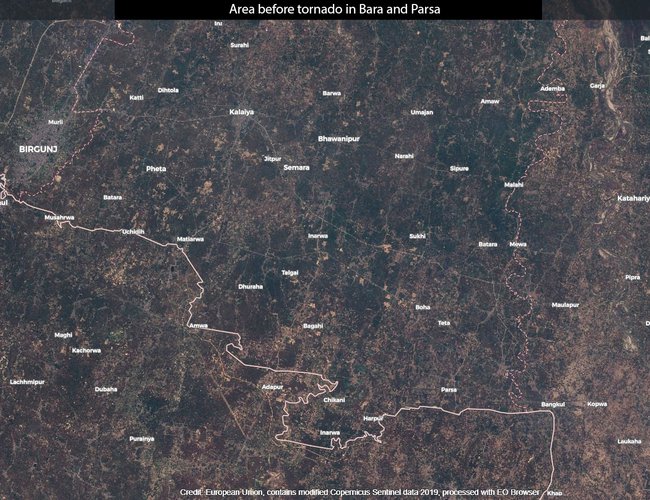 At a time when there was confusion over the cause of last week storm, Department of Hydrology and Meteorology (DoHM) officially declares that the tornado was responsible for the devastation at Bara and Parsa districts last week.

DoHM with the support from Small Earth Nepal took an initiative to investigate the destructive storm in Bara and Parsa District. Led by Madan Lal Shrestha, former director general of DoHM and academician of Nepal Academy of Science Technology, a group of scientists found that Bara's windstorm was tornado.

A preliminary report made public by the Department of Hydrology and Meteorology said that it was the first recorded tornado in Nepal. "We will publish its full report within a few days," said Director General of DoHM Sarju Kumar Baidhya. "Our preliminary findings were based on sufficient evidence in the disaster hit areas that matched common signs of tornado."

"The windstorm raced up to a stretch of 30 kilometers on the same path without causing any damage to structures that were even slightly away from its path, a tell-tale sign of a tornado," said Shrestha. “This is the most important clue, as only tornadoes among the high-velocity storms move on a certain trail.

“The width of the trail was around 200 to 250 meters, which is another unique feature of a tornado,” said Shrestha, who is also a former director general of DoHM, studied the disaster with the support of an organization — The Small Earth Nepal — which collected satellite pictures of the area from EU’s Sentinel Satellite.

The Himalayan Times Reports that the the satellite records pictures of Nepal every five days and scientists studied the pictures of the area before and after the storm.

“Like a normal tornado that lasted from five to 20 minutes, the Bara and Parsa windstorm also lasted for a very limited time. But the intensity of the wind was so strong that it even uprooted trees and overturned trucks. Such devastation is possible only by tornadoes,” said Baidhya.

Dhiraj Pradhananga, meteorology expert and assistant professor of meteorology at Tribhuvan University, said the typography of Nepal normally did not allow formation of such rare weather situation. It is exceptionally rare case in Nepal, as formation of tornadoes needs massive amount of weather instability, he added.

According to report published in The Himalayan Times, Pradhananga, who is also a member of the investigation team, said the westerly wind took cumulonimbus cloud, which normally brings rain and thunderstorm in the country, from Pokhara through higher atmospheric pressure towards Bara and Parsa districts that day.

Given the recent reports, Nepalis will have to be more alert and the government needs to put in place mechanism to deal with such rare weather conditions in the future. 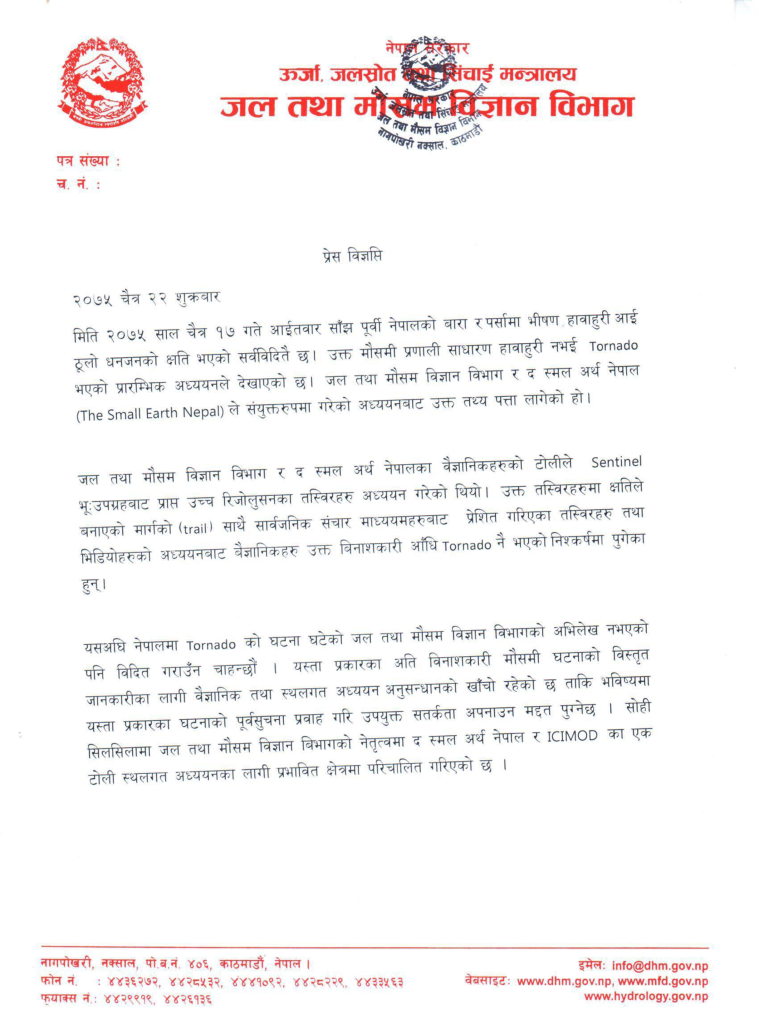 Generally Cloudy In The Eastern And Central Hilly Region Of Nepal By NEW SPOTLIGHT ONLINE 14 hours, 6 minutes ago

Weather Forecast For May 26 Across Nepal By NEW SPOTLIGHT ONLINE 1 day, 14 hours ago

Weather Forecast for May 25: Mainly Fair In Rest Of Nepal By NEW SPOTLIGHT ONLINE 2 days, 13 hours ago

Weather Forecast For May 24 Across Nepal By NEW SPOTLIGHT ONLINE 3 days, 14 hours ago

Generally Cloudy In Central And Eastern Region Of Nepal By NEW SPOTLIGHT ONLINE 4 days, 13 hours ago 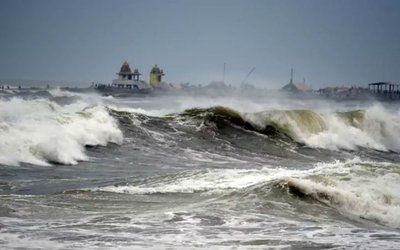 Weather Forecast For May 22 Across Nepal By NEW SPOTLIGHT ONLINE 5 days, 14 hours ago