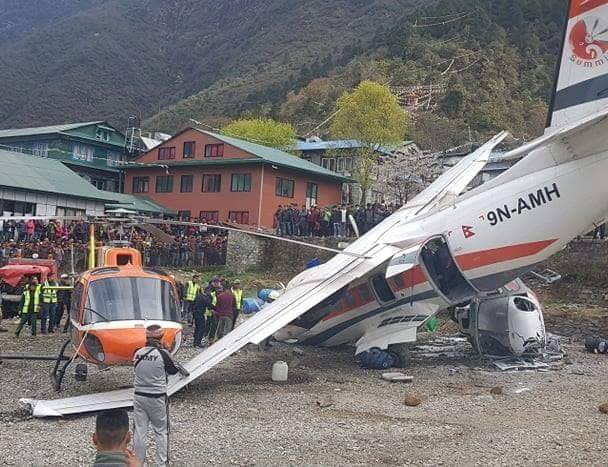 One more killed in Lukla Summit Air’s Crashed at Tenzing-Hillary Airport on April 14 reaching the total casualty 3. Those who killed in the accident included copilot Shera Dhungana and Assistant Sub Inspector of Police duo Ram Bahadur Khadka and Rudra Bahadur Shrestha. Dhungana and Khadka died at the spot and Shrestha at Grandy International Hospital. Two other injured the crashed were admitted to Hospital for further treatment.

Two injured admitted to the hospital included Chet Bahadur Gurung and Sharad Khadka. The plane was at the runway to final take off.

According to the press statement issued by Civil Aviation Authority of Nepal (CAAN), the Summit Air’s plane and Manang Air’s chopper were completely destroyed in the incident, while another chopper (9N-ALK) belonging to Shree Airlines was partially damaged.

This is the second accidents of Summit Air in Lukla. Summit Air’s Flight 409 crashed short of the runway whilst attempting to land at Tenzing–Hillary Airport in Nepal on 27 May 2017. The aircraft was a Let L-410 Turbolet the same model collided today with helicopter.

It was on final approach when the aircraft hit trees short of the runway and subsequently slid down a slope before coming to rest about 200 meters (656 ft) below runway level and 130 feet short of the runway. The captain and the first officer died as a result of the accident, while another crew member received injuries.

Due to the abnormally short runway on Lukla, aircraft are required to approach the airport at very low speeds, making the aircraft extremely vulnerable to sudden downdrafts and strong winds that are known to occur in the mountains.