With his appointment as the Managing Director of Nepal Electricity Authority, Kul Man Ghising has changed the energy scenario 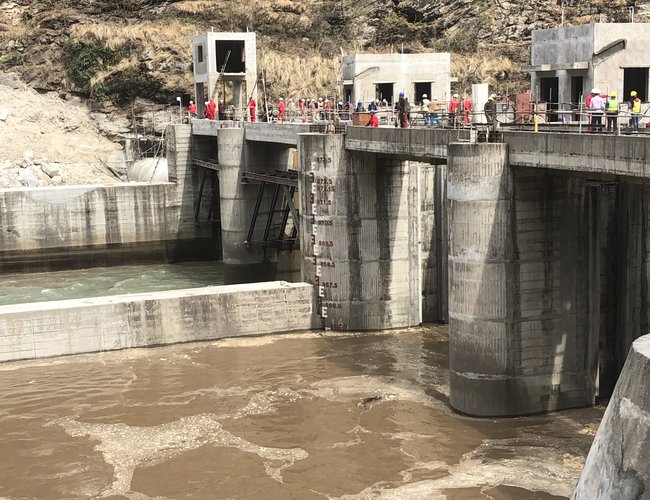 After disruption of construction of the project for four months by Dharan sub-municipality, the construction work of 220 kV Kosi corridor Transmission line project has resumed.

Since last November, the sub-municipality has created obstruction on the construction of transmission line, agreeing to allow the work through the same route.

Similarly, the 132-33 kV substation constructed at Marki Chwok of Tanahu has changed. Following the completion of construction of sub-station, Nepal Electricity Authority (NEA) has started the distribution of electricity to Gorkha through it.

After the completion of Marki Chwok substation, the construction of 132 kV Middle-Marshyangdi-Dumre-Damuli Transmission line has also completed. The 132 kV double circuit Middle Marshyangdi-Damauli-Marshyangdi Transmission has already been changed earlier.

Whether it is 132 kV Kabeli or 220 kV Chilime-Trishuli,Trishuli-Matatirtha or Marsyangdi Kathmandu, Khimti-Dhalkebar 220 kV and Dhalkebar-Mujafarpur 400 kV, all the transmission lines were waiting for action.

These were a few strategically important transmission lines completed in the last few months. Following the appointment of managing director of Nepal Electricity Authority, Ghising has made a virtually impossible work possible in getting rid of the decade-old chronic loadshedding. Similarly, he also pushed many disrupted transmission line projects and hydropower projects under the construction.

Apart from this, MD Ghising has also made Nepal Electricity Authority (NEA) into a profitable public utility. MD Ghising has shown that management skills of an individual can make a difference.

As MD Ghising has been working to make many impossible works possible, a group of people who have been reaping benefits by delaying and stalling the projects and others, who benefited from over 5 billion rupees of business of battery and inverters, were waiting to defame him.

As MD Ghising pursued strict financial discipline and controlled the leakage within NEA, a section of people within his office are also waiting for an appropriate time to defame and demoralize him.

As MD Ghising’s popularity in public is so high, many others see it as a challenge. At a time when MD Ghising has been working in full swing, a group of people are launching propaganda against him pushing him in controversies.

According to Rajan Dhakal, project head, there were obstructions in 17 towers. "After a series of meetings and discussions, ward chairman and other people agreed to allow the construction of the transmission line," said Dhakal. “The project will take necessary precaution to minimize the effects and carry out a number of community based development activities.”

After a letter issued by deputy mayor of sub-municipality Manju Bhandari requesting NEA to relocate some towers from current position to save tourism spot in Bishnupaduka, the construction work was stalled. NEA has insisted that any change in the alignment will delay and raise the project cost hampering to evacuate 550 MW of electricity burdening the country.

Managing Director of NEA Ghising also took several steps to convince the local bodies that any obstruction in the project construction will be dearly as the government has to pay money to the promoters who are building hydropower for failing to evacuate the energy.

The Kosi corridor transmission line will evacuate the powers generated by the hydropower projects under-construction in Bhojpur, Sankhuwasabha, Teharathum and Tapelejung of province 1. This line will finally link to national Transmission line.

NEA has already signed PPA with 28 projects with 516 MW of power. As these projects are in different stages, the completion of Kosi Corridor is very crucial for the projects.

According to Dhakal, they will start laying the string within a few days. Total cost of the project is 37.5 million dollar. The project will complete by the end of 2019.

Now on the distance of transmission line is reduced and Marki Chowk substation will supply electricity through Abukhairani. “With the reduction of supply length, it will reduce system loss, voltage drop and tripping,” said MD Ghising.

Constructed under Nepal Government and NEA’s investment with concessional loan of Asian Development Bank, the total cost of the project was Rs. 600 million. According to Shah, the project is completed within an estimated cost.