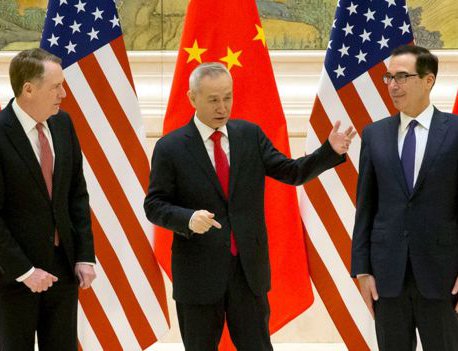 Mr Trump said talks between Washington and Beijing will continue even after a deadline passed on Friday for them to reach an agreement.

As a result the US raised tariffs to 25% from 10% on goods from China.

China says it "deeply regrets" the US action and would have to take "necessary counter-measures".

However Beijing also confirmed on Friday that further negotiations would take place following two days of what were described as "honest" and "constructive" talks.

What has Trump said?

On top of the tariffs implemented on Friday, Mr Trump said a process had begun to place the full 25% tariff on a further $325bn of Chinese goods.

The tariffs taken in would be used to buy US agricultural goods, which would then be used for "humanitarian assistance", Mr Trump said.

The president tweeted that, depending on the outcome of future negotiations, the tariffs "may or may not" be removed.

Mr Trump earlier said he was in "no rush" to reach a trade agreement following two days of bilateral talks.

Only recently, the US and China appeared to be close to ending months of tensions over trade.

The next US-China battleground

Critics pointed out on Twitter that it is not China who will pay the taxes, but US importers, and ultimately its consumers.

What has China's reaction been?

China's Commerce Ministry confirmed the latest US tariff increase on its website.

"It is hoped that the US and the Chinese sides will work together... to resolve existing problems through co-operation and consultation," it said in a statement.

Chinese stock markets rose on Friday, with the Hang Seng index up less than 1% and the Shanghai Composite more than 3% higher.

What will be the impact of the tariff rise?

The US-China trade war has weighed on the global economy over the past year and created uncertainty for businesses and consumers.

Even though Mr Trump has downplayed the impact of tariffs on the US economy, the rise is likely to affect some American companies and consumers as firms may pass on some of the cost, analysts said.

Deborah Elms, executive director at the Asian Trade Centre, said: "It's going to be a big shock to the economy.

"Those are all US companies who are suddenly facing a 25% increase in cost, and then you have to remember that the Chinese are going to retaliate."

The Failure To Resolve The Crisis Could “Set The World On Fire”: Henry Kissinger By NEW SPOTLIGHT ONLINE 1 day, 12 hours ago

British Prime Minister Admitted To The Hospital For Test By NEW SPOTLIGHT ONLINE 1 day, 17 hours ago