Recent Political And Security Decisions And Its Impact

Nepal is exposed to political, security, economic, diplomatic and cultural setback leading to downturns and risks. Political and Security situation is volatile, uncertain, complex, and ambiguity 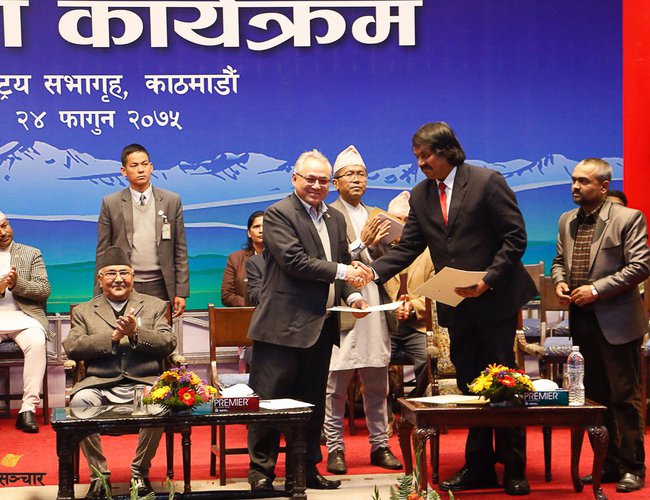 Nepal is constitutionally obliged and bound to the new order with nationalism, secularism, republicanism and federalism. It can be perceived that the Nepal Communist Party’s (NCP) government is beyond doubt yearning to challenges and arguments along the avenue. The NCP leadership unquestionably desires strong-minded, resolute and modest administering and supervising of national issues that bears long term political and security consequences.

Nepal is exposed to political, security, economic, diplomatic and cultural setback leading to downturns and risks. Political and Security situation is volatile, uncertain, complex, and ambiguity. Within weeks, three notions occurred; the government banned Biplav’s NCP party that owned bombing at 11 sites, which caused one death and two wounded in the capital plus their activities, pledging for the deployment of the Nepali Army (NA) on Prime Minister orders as well as signed an 11 point agreement with CK Raut on 8th March. CK although trivial in strength was advancing with a “free Madhesh” movement, which bears national, regional and international corollary. These three foremost heated debates on security, political and diplomatic issues was all over social, visual and print reports and beyond doubt has national, regional and international corollary.

The Prachanda led NCP Maoists deceased armed struggle through signing of the peace agreement in 2006 and have been on democratic arrangement. There are evidences that the weapons the Maoists cadres possessed in spite of everything is with the split up group, Biplav’s NCP who confessed the bombings. The government is taking stern action against the cadres and senior leaders of the Biplav NCP as per the existing legal provisions. Together with banning the party a resolution to deploy the national force, the Nepali Army on the Head of the Government’s (HOG) orders had significance. It can be speculated that the HOG’s gesture to deploy the army on orders signifies physiological motion, priority and considerable concern even if the short cut process was constitutionally debatable.

Together with political dialogue, strict implementation of law of the land could have been an option.

The option of a political dialogue as well as strict implementation of law of the land could have been carried out by the government. The deployment of the army would have long term political implication when the Executive does not have the majority in the Legislature. National issue should have national response, so taking in confidence all the political parties small or big especially the opposition and other stakeholders would create an conducive environment for the military to operate with alacrity, validation, rule of engagement and within predetermined time frame to normalize the unstable situation as well as understanding the key geo-political forces at work in Nepal.

The NA has the tradition and history to follow directives and instruction of democratically elected existing government if orders and directives are constitutionally correct and according to the rules and regulation of the land. The deployment of the national force should move through the National Security Council approved by the cabinet and endorsed by the President. The decision needs parliament approval after one month. The five members NSC are also members of the cabinet except the CoAS.

The Biplav led NCP is not in the stage to confront the military with enthusiasm and capacity but the illegal undesired activities is an irritant for the law and order environment, which will have direct bearing on politics, economics and diplomacy. The decision by the government prohibiting the Biplav led NCP has appealed for confrontation on the day of the cabinet approval. The rise in unemployment, miss governance, corruption, lack of political motivation, spoilers will be an attraction to join the outlawed outfit. The trend of unstable environment of the country has been out from different sources from time to time may have encouraged the military to modernize with new weapon system and improve its capability with the existing strength.

Security sector priority with optimum efforts in intelligence, professional law and order forces should have been the beginning for adhering to democracy and stability.

The Government and CK endorsed accord illustrated the way to long time secessionist campaigner CK to guide his believers and faction who were willing for armed struggle to choose a peaceful democratic path. The leadership may have given up "Free Madhesh" but nonetheless seems to be carrying the political goal and impetus by way of varied democratic mechanism. The long-awaited political concern to bring CK to peaceful politics is encouraging, yet a test for his supporters’ behavior till the next election is imperative when political possibility in the Madhesh is shifting. You cannot deny the probability of the party to go on separate ways. This is a positive appreciated political gesture but has many sides to it, which requires political, diplomatic and security scope.

Many nations across the world have been opting for national referendums as politicians and governments lack confidence to push through major change and are putting more and more big decisions to popular vote. Of many referendums 2016 saw four that opted against the expected result, democracy and values of the 21st century. The Colombians rejected the peace deal, Britain split from the EU, Thai endorsed the Constitution brought by the Military baked government, and Hungarians backed the government’s plan to restrict refugees.

Of the five states of the UK a referendum on Scottish independence was held in 2014, when 55% voted against the proposal.

On1st of Oct 2017 a semi-autonomous Catalan parliament in the north-east of Spain answered yes to “Do you want Catalonia to become an independent state in the form of a Republic?” The push for independence let go Spain into its major political crisis for 40 years. Yes won 92% for independence and 8% voted against on a 43% turnout and declared independence on 27th Oct. The Madrid imposed direct rule by invoking Article 155 of the Spanish constitution. The Catalan leaders were sacked, parliament dissolved and the nationalist winner of the Dec snap election caused former Catalan president Carles Puigdemont and four others to flee, while two are in prison. Even prior to the voting the constitution court of Spain suspended the move and affirmed illegal and violated the Spanish constitution on 7th Sept 2017. Though Catalonia does not have the strength for unilateral independence, but it has colossal aptitude to threaten the whole of Spain.

Though the outcomes were dealt with national referendum a valid democratic practice all these events accomplished one thing: referendums are messy and dangerous.

PM Oli has been stressing and obstinate that there can be no referendum on matters of national integrity and sovereignty hinting on CK’s demand and behavior. Politics does and have immediate remedy but political decisions have long term impact so the years ahead are vital for federalism.

The geo-political, geo-economic situation with China, India, both immediate neighbors and the US’s the only global power strategic activities are continuing. Globalization and multilateral treaties and conventions are less significant. The two rising immediate neighbors are at the cross roads when it comes to their own growth. Nepal’s national security situation is in a dilemma and striving to find a response when political diversification with nationalism is under deliberation and extra regional and regional influences on national politics and traditional beliefs are enduring. The speculation and view that major transformation to Federalism, Nationalism, Republicanism and Secularism would move on the correct line was judged with ideological emotion and not realism. The national forces are focusing on their own internal dynamics, all the security agencies are more concerned and attempting to address their internal governance, when the domestic security configuration, regional political, economic and security interests is altering and altering rapidly.

The government’s political decision is undeniably an optimistic gesture in regards to the two indisputable national threats of probable armed conflict in the hills and a secessionist movement in the Madhesh. National challenges needs national motion and the 11 point agreement and prohibiting Biplav’s NCP should have added earnestness and requisite to be a national consensus with political unity and involvement of other instruments of power even the security sector.

The geo-political shift, sensitivities, transformation and the strategic importance requires collective deliberation in the national security sector and political approach to shape the environment for peaceful economic activities and opportunities with political and policy stability. Lack of a strategic body under the executive is the need for holistic approach to national security and political governance. If security sector is not prioritizes, grim cost will be imminent so Nepal requires an efficient, innovative and an agile security system.

National Security requires rearranging, revitalizing and reshaping the Defense and all of the law enforcement forces with affordable expenses and immediate attention to the intelligence forces for national well being when India; after independence and China aspiring to be a global player are both shaping their defense sector with changes in strategic structures, force organizations, restructure the army and capabilities to increase combat potential.

Political unity must visualize how Nepal will outline politically, diplomatically, culturally and economically in the next five to ten years so that correct policies are situated in order. Miss governance, corruption and not being answerable from irresponsible political, undemocratic decision are the prime anxiety for sure. Responding to the trends in global politics and in South Asia with political unity and political endorsement is considered necessary to safeguard Nepal’s unity in diversity and sovereignty.

Are geo-political events, dealings and happenings in Nepal orchestrated to de-evaluate values and the identity of Nepal and the Nepalese? Will the political decision and participation bear national security challenges? These are questions floating that need answers. Hope the responsible leaders realize!!!

JICA To Support Improvement Of The Inclusive Sanitary Environment in Pokhara By NEW SPOTLIGHT ONLINE 3 days, 10 hours ago

The United States Provides Additional Funding Support to Nepal Amidst the Second Wave of COVID-19 By NEW SPOTLIGHT ONLINE 3 days, 14 hours ago