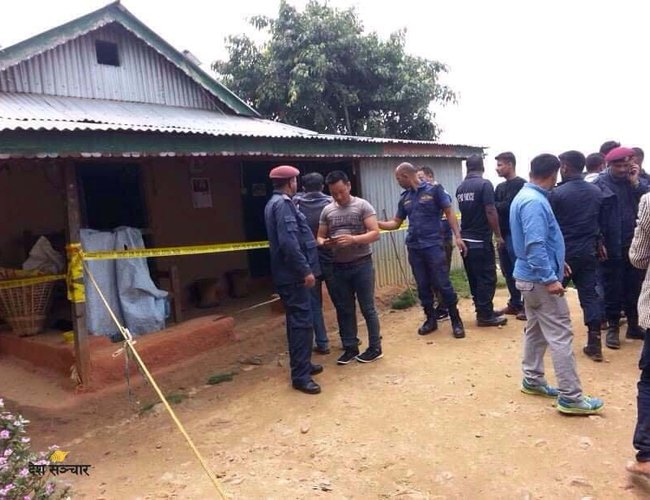 Police have suspected that the cold-blooded murder of nine members of two families in Panchthar district might have been carried out by a close relative on the issue of divorce.

The preliminary investigation shows that Makhin, the younger son in law of Bam Bahadur Phiyak, had unhappy relationship with his wife Mana Kumari Phiyak who had been living at her parents’ home. It has also been learned that Makhin’s relation with his brother-in-law (Sadhu Dai) Dhanraj Sherma, had also turned sour. Police suspected that Makhin may have killed the family of his wife and that of his brother-in-;aw’s family, out of grudge.

As many as five mutilated bodies of Sherma family were found inside the house, while four others of Phiyak family were recovered outside, in Arubote area of Miklajung Rural Municipality-3, on Monday midnight, local Archana Gurung said.

The local people heard about the attack only the following morning as the massacre took place at midnight, said the villagers.

Separate teams deployed from Dashami Bazaar-based police beat, Rabi-based Area Police Office (APO) and Panchthar District Police Office, Ilam’s Chisapani-based APO, Armed police Force based in Panchthar, reached the incident site for the investigation into the incident. Subsequently, the bodies would be sent to a hospital for the postmortem.

The incident site is at the distance of about 70km from Phidim, the district headquarters. It takes about three hours on vehicles along the unpaved muddy road to access Arubote area.

Only one person — Sita Khajum (12) — managed to survive the fatal attack. She has been severely injured in the attack. Mutilated bodies of five members of Sherma family were found inside the house, while bodies of four others of Phiyak family were recovered outside, said local Archana Gurung.

Ward chair of the village Hastaraj Phiyak confirmed the attack. The carnage survivor Sita said a group of masked people broke into the house at midnight on Monday and killed the family members with sharp weapons.

Six Killed In A Jeep Jajarkot Accident In Jajarkot By NEW SPOTLIGHT ONLINE 2 weeks, 4 days ago

Motor Accident In Chisapani: 3 Killed And 4 Injured By Agencies 3 weeks ago

Three Dead Bodies Of A Family Recovered In Their House In Thimi By NEW SPOTLIGHT ONLINE 1 month, 2 weeks ago

Two Killed In A Jeep Accident In Waling By Agencies 1 month, 3 weeks ago