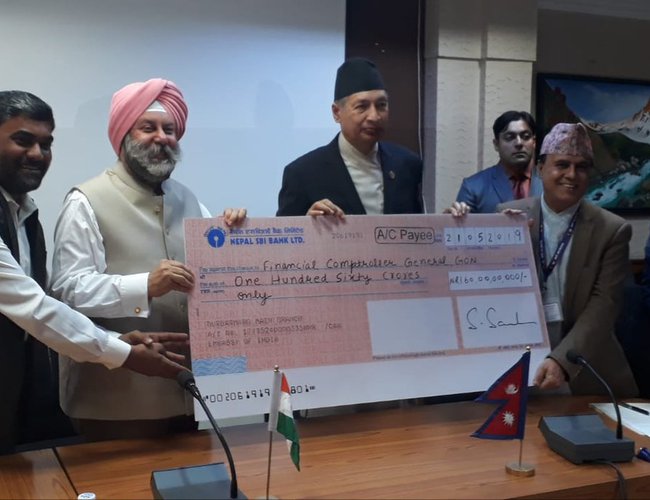 Manjeev Singh Puri, Ambassador of India to Nepal, handed over a cheque for a sum of NPR 1.6 billion to Finance Secretary of Nepal Dr. Rajan Khanal in presence of Finance Minister of Nepal Dr. Yuba Raj Khatiwada.

The amount has been released towards reimbursement of part payment of 1stand 2ndtranches of housing reconstruction extended by Government of India (GoI) to 50,000 housing beneficiaries in Nuwakot and Gorkha districts. India has so far reimbursed a total of NPR 4.5 billion to Nepal.

Government of India (GoI) is partnering with United Nations Development Program (UNDP) and United Nations Office for Project Services (UNOPS) for providing Socio-Technical Facilitation to the house owners to ensure that they rebuild their homes as per the Government of Nepal’s earthquake resilient norms.

During the program, Government of Nepal expressed its appreciation for the sustained and generous humanitarian support extended by Government of India for post-earthquake reconstruction.

On the occasion, Ambassador Puri thanked the Government of Nepal for the partnership and reiterated that the people and Government of India remain committed to completion of post-earthquake reconstruction of projects in Nepal.

Australia Is Proud Of Our partnership With Nepal: Ambassador Budd By NEW SPOTLIGHT ONLINE 22 hours, 34 minutes ago