Qatar Airways Wins Four Awards at the 2019 Skytrax World Airline Awards, Including the Coveted 'Best Airline of the Year' for a Record Fifth Time 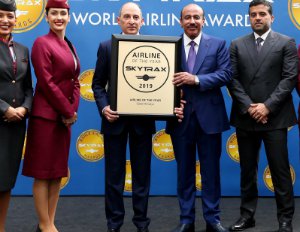 Qatar Airways have won four prestigious prizes at this year’s 2019 Skytrax World Airline Awards, including the highest accolade of ‘World’s Best Airline’ – becoming the only airline in the competition’s history to win it five times (2011, 2012, 2015, 2017 and 2019).

The airline has been named ‘Best Airline in the Middle East’ for a third successive year, while its ‘World’s Best Business Class’ accolade is the fourth year in succession that it has won that award. In retaining its ‘World’s Best Business Class Seat’ award for its patented Qsuite product, the airline beat strong competition from all over the world.

Minister of Transport and Communications . Jassim Saif Ahmed Al-Sulaiti, who attended the Skytrax Awards ceremony, said: “This is a great day for the state of Qatar, and I am delighted to have been here today to witness Qatar Airways being recognised as the ‘Best Airline of the Year’ for the fifth time”.

Qatar Airways Group Chief Executive Akbar Al Baker, - who was accompanied by Chief Operating Officer of Hamad International Airport, Engr. Badr Al Meer, - said: “The Skytrax awards are widely recognised as the most prestigious in the airline industry, so to have won so many prizes at the 2019 ceremony is a truly memorable experience for Qatar Airways.

“We are thrilled to be globally recognised by our customers by winning these four prestigious awards. Being the first airline to be named ‘Airline of the Year’ for the fifth time is a landmark achievement and, combined with three other major Skytrax awards, is testament to the tireless efforts of the entire Qatar Airways team. It is a proud moment for the airline as our constant innovation and service standards set the benchmark in our industry.”

“The fact that the Skytrax awards are voted for by travellers makes them especially meaningful for all of us in the industry. Aviation is a competitive business, and to have received such recognition will spur us all at Qatar Airways to even greater heights and we look forward to delivering our world-class product to millions of passengers in the coming years.”

Commenting on the awards, Skytrax Chief Executive Officer, Mr. Edward Plaisted, said: "To be named as the World’s Best Airline is a great recognition of Qatar Airways’ high standards, and recognises the hard work and dedication from every member of staff to satisfy customers. To achieve this accolade for a fifth time is a remarkable achievement, and we congratulate them for this unique success.”

The Skytrax World Airline Awards are independent and impartial, introduced in 1999 to provide a customer satisfaction study that was truly global. Travellers across the world vote in the largest airline passenger satisfaction survey to decide the award winners. The awards are referred to by media around the world as “the Oscars of the aviation industry”.

Skytrax pay all costs of the Survey and Awards event, and airlines do not pay any entry or registration fee. The awards event and award presentations are supplied by Skytrax at no charge. There are no fees or costs for airline use of the award logos and results. More than 100 customer nationalities participated in the survey with 21.65 million eligible entries counted in the results. Survey entries were screened by Skytrax to identify IP and user information, with duplicate, suspect or ineligible entries deleted. More than 300 airlines are featured.

Qsuite, a patented Qatar Airways product, offers a First Class experience in the Business Class cabin. Qsuite features the industry’s first-ever double bed in Business Class, as well as privacy panels that stow away, allowing passengers in adjoining seats to create their own private room, a first of its kind in the industry. Qatar Airways proudly launched Qsuite at ITB Berlin in March 2017 to outstanding global acclaim, and has set a new standard for luxury travel with this innovative product. These awards demonstrate the quality of Qatar Airways’ unrivalled level of service, and prove that the airline continues to win the confidence of the travelling public.

Qatar Airways currently operates a modern fleet of more than 250 aircraft via its hub, Hamad International Airport (HIA) to more than 160 destinations worldwide. The airline will add a number of new destinations to its extensive route network in 2019, including Davao, Philippines; Lisbon, Portugal; Mogadishu, Somalia and Langkawi, Malaysia.