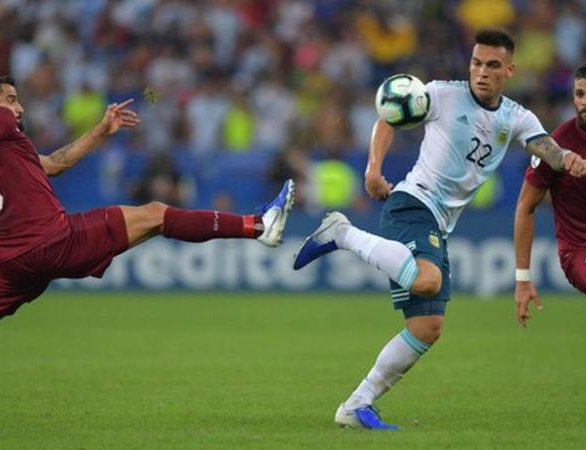 Argentina set up a tantalising Copa America semi-final against hosts Brazil after easing past Venezuela 2-0.

Manchester City striker Sergio Aguero was involved in both goals as Argentina aim for their third straight final.

In fact, that was Venezuela's only shot on target with River Plate goalkeeper Armani redundant for much of the game, though he did prove to be an effective aerial presence.

Lionel Scaloni's side will play Brazil in Mineirao at 01:30 BST on Wednesday after the tournament hosts edged past Paraguay on penalties following a 0-0 draw.

Though he was largely quiet against Venezuela, captain Lionel Messi will take heart from knowing Argentina are one win away from another Copa America final.

They have been beaten on the past two occasions on penalties by Chile and lost in the final in four of the past five tournaments.

Argentina were the better side in a fragmented game not helped by Colombian referee Wilmar Roldan handing out six yellow cards and stopping play on a number of occasions to consult about incidents with the video assistant referee.

Inter Milan striker Martinez should have had two goals in the game, but struck the outside of the post in a one-on-one with the goalkeeper, while substitute Angel di Maria curled straight at Farinez late on.