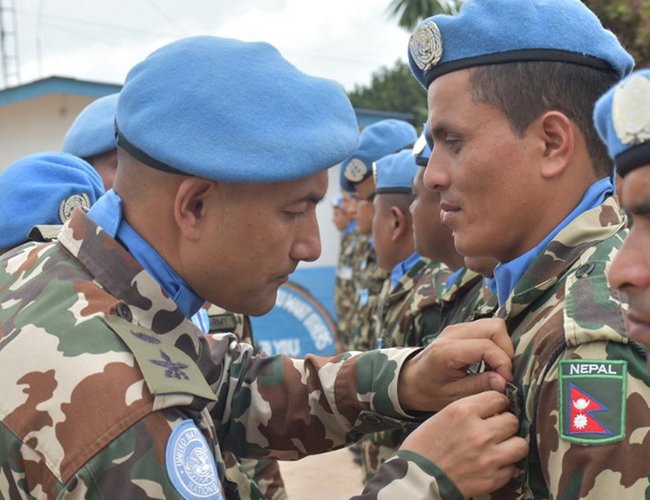 One hundred and seventy-five peacekeepers from Nepal's engineering battalion and two Nepali military observers were awarded the United Nations medal during a colorful ceremony at the Nepalese contingent’s base in Bunia District on Thursday, July 11, 2019.

Several high-ranking military and civilian officials from the UN Organization Stabilization Mission in the Democratic Republic of the Congo (MONUSCO) took part.

According to the UN tradition, these soldiers served under the UN flag in the DRC for a year and have concluded their mission. They contributed to the implementation of MONUSCO’s mandate and to international peace in general.

In this province, the work of these peacekeepers facilitates the mobility, deployment and operations of MONUSCO forces in the field, while providing technical assistance to the implementation of the country's stabilization strategy.

From the rehabilitation of roads (more than 2,500 kilometers across the DRC but especially in Ituri) to the construction of bridges (Bailey Bridge for example), airstrips, football pitches, schools, septic tanks and sinks, the work of the Blue Helmets also benefits local populations. The rehabilitated roads are not only important for MONUSCO's ‘protection of civilians’ activities, but also for the local people, their livelihoods and the region’s economic viability.

Hence the pride of the Commander of Nepalese contingent Colonel Jagdish Khadka: "Our work has a direct impact on people's lives. In return, we are always admired. At the end of the day, among other things, it is rewarding when people greet us with their smiles and express their gratitude through their eyes."

For Cecilia Piazza, Head of MONUSCO’s Ituri office, "the 22nd contingent of Nepal has distinguished itself by its ability to implement its skills as civil engineers, especially for the rehabilitation of the road Bogoro-kasenyi-Tchomia,” facilitating thus the mobility and the exchanges of the local populations.

According to United Nations Information Center, the first Nepalese engineering contingent arrived in Congo on 23 October 2003; the one just decorated is the 22nd of its kind to support the execution of the MONUSCO mandate in Ituri. United Nations Nepal

NAC Brought 17 Death Bodies Of Nepalis From Malaysia By Agencies 22 hours, 34 minutes ago