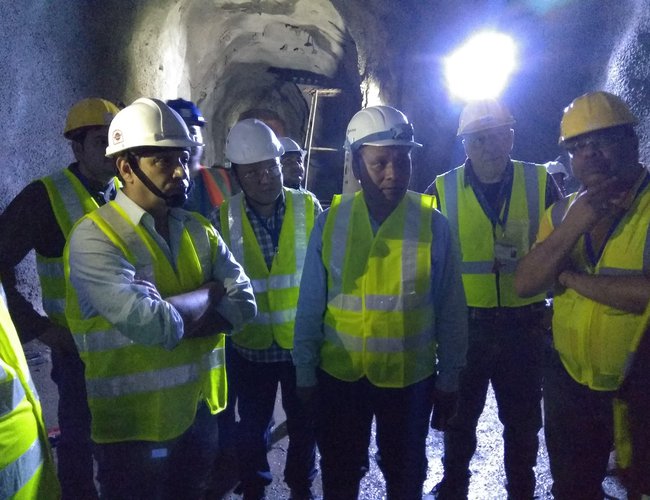 Addressing the different stake holders at project site, he said that the contractor has to complete the first unit by March 2020 generating 76 MW of electricity and remaining other five units need to be completed within June 2020 . "Our main concern is the date line set up work completion routine. "Be serious. Let complete the work with together and it will make all us happy," said Ghising. " If we are unable to complete the work, it will create tensions for all of us. He directed companies to increase the number of workers and work in three shifts.

Contractors have already installed 27.5 meter penstock pine in vertical shaft in last one months. This is one of the most complicated and difficult part of the project.

With the length of 372 meter, the length of upper shaft penstock shave is 310 meter. There is now 70 penstock pipe with 5 meter length and 27 tons each need to install.

After delayed by Indian contractor of Lot 2 Texmaco Rail & Engineering Limited in stalling penstock pipe in vertical shaft, the installation of lower vertical shaft is given to lot 3 contractor Andritz Hydro of Austria with no additional financial burden to Upper Tamakosi Company. However, Texmaco Rail & Engineering Limited has been installing penstock pipe in Upper Shaft. 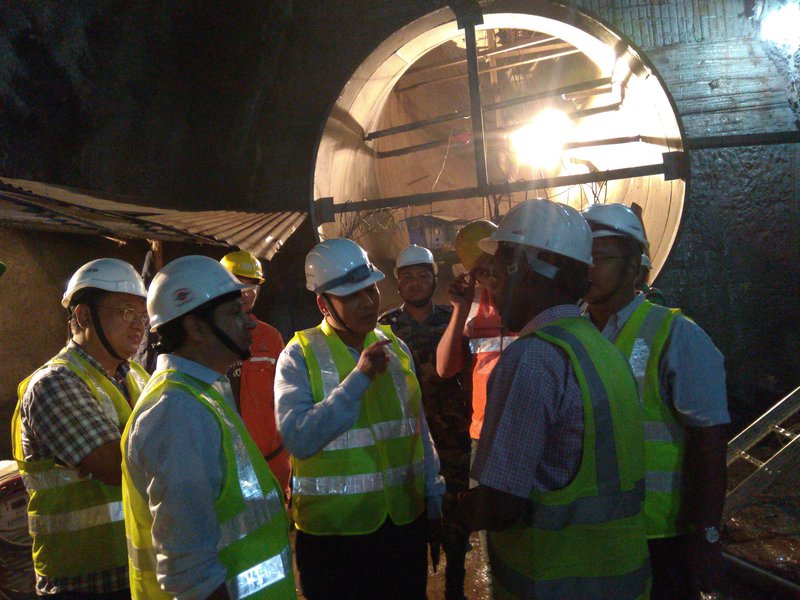 According to a report, it took 365 hours to install first penstock pipe in lower vertical shaft. For the installation of fourth pipe, the timing was 128 hours. MD Ghising also directed the contractors to speed up the work further reducing the timing.

As they have already installed 7 penstock, the confidence level of contractor is now up. MD Ghising hoped that the pace will further increase in coming days. However, the work of Indian company is still unsatisfactory on installing pipes in upper vertical shaft. MD Ghising called CEO GC Agrawal of Texmaco Rail & Engineering Limited from project sites and reported him unsatisfactory performance. He urged CEO Agrawal to fulfill his commitment by accelerating the work.

He said that Texmaco has not working in any work routine and management assigned in the site is weak with insufficient human resources. He urged CEO to look upon the matter the seriously.

Due to earthquake of 2015, after shocks, landslides, Design change and Madhesh Agitation were reason to delay the project. Similarly, the weak work performance of Lot 2 contractor of hydro mechanical is also responsible for delay.

Initially, the project completion duration was set for 2016/17 and later on it was reschedule for 2018/19. According to CEO of Upper Tamakosi Hydro Power Company Bigyan Prasad Shrestha, the weak performance of lot 2 contractor is responsible for the current delayed.

The construction of powerhouse has already completed and the construction of transmission line is in the last stage. With a direction of minister of Energy, Water Resources and Irrigation Barsha Man Pun given in December 2018, MD Ghsing has been visiting the project site monthly and meeting project management, contractors and consultant reviewing the project progress and difficulties to complete the project in a deadline set by minister.

LOOMING LOADSHEDDING NEA SAYS NO By A Correspondent 1 week, 4 days ago