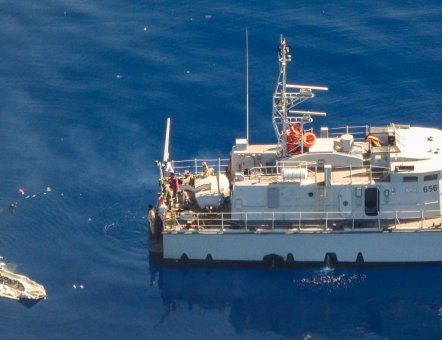 Up to 150 migrants are feared drowned after a boat capsized off the coast of Libya on Thursday. This would be the largest shipwreck on the Mediterranean Sea this year.

About 147 more were rescued by local fishermen and the Libyan coast guard, according to the United Nations' refugee agency UNHCR. Two people are in the hospital in critical condition.

The wooden boat was on its way to Europe until it overturned near Al-Khums, a town just east of the capital city of Tripoli.

At least 65 people died in a similar incident in May, when a boat sank off the coast of Tunisia.

Rival factions and intricate smuggling networks have surged in power following the former dictator Moammar Gaddafi's overthrow and death in 2011.

"Urgent action is needed to save lives at sea and prevent people from getting on these boats in the first place by offering safe, legal alternatives," said UNHCR spokesperson for the Mediterranean Charlie Yaxley.

Thousands cross the Mediterranean into Europe each year, though crossings have dropped since Italy began cracking down on migration.

The country has closed its territorial waters to boats headed by NGOs, which attempt to rescue migrants.

Additional agreements with the Libyan government force ships carrying migrants back to Tripoli, a policy human rights advocates have denounced. In July alone, about 4,000 people were intercepted and brought back, according to the International Rescue Committee, which has partnered with the U.N. on the issue.