This deep social bankruptcy is a huge bankruptcy of democracy. Our democracy is seriously wounded and bleeds with the suffering of the impoverished. These policies are modifying the social model to continue distributing the social wealth in favor of a minority and against the poor. 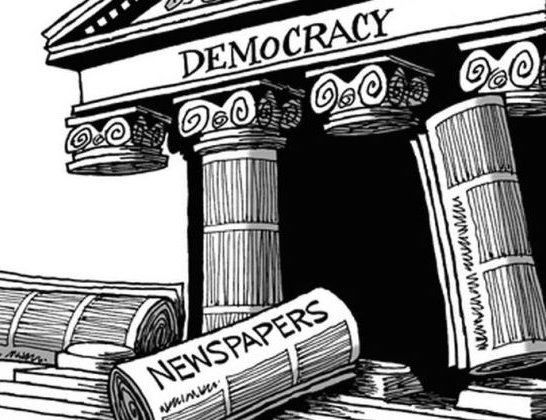 We are witnessing an emergence of unrealistic democracy or democratization without rights and undemocratic liberalism or rights without democracy. Once upon a time, the former British Prime Minister Winston Churchill said that "The best argument against Democracy is a five-minute conversation with the average voter." Churchill had a more positive attitude toward the average voter. Nearly a hundred years ago, Churchill's statement was an anecdotal example of British humor and today however, it represents the metonymy of the most acute and even more difficult political and sociological problem.

Democratization in Nepal is stagnating. It is going through the worst crisis in Nepal. The democratization wave that started with the fall of the panchayat regime has come to a standstill. Suddenly, we do not hear anything else but our democracy is in danger and the economy is heading for a new recession. Pessimism about the end of democracy is not only separated from reality but also harmful.

More than ever, politics seems to be driven by conflict and anger. There is a new norm. It is exhausting and in excess. The sad reality is what is being done and said by them is wrong but people believe still and listening to these leaders. We fail to follow the fundamental principles of democracy. Our democracy does not treat the people democratically, the people who are raising issues to fix the system. Democracy is being devoured from within in an accelerated rate. The worst thing is that there are some very clear warning signs but we have ignored them.

This deep social bankruptcy is a huge bankruptcy of democracy. Our democracy is seriously wounded and bleeds with the suffering of the impoverished. These policies are modifying the social model to continue distributing the social wealth in favor of a minority and against the poor. They are distributing what belongs to everyone for the enrichment of a few. That is the greatest practical denial of democracy. Democracy can die when the Government tries to control media and their own citizens and try to push aside their main opponents by tilting the political playing field in their favor, changing the electoral rules to ensure their permanence and hinder their opponents.

Our education system is deteriorating day by day. Why is our education system failing? It is based on a very simple principle. The less educated the citizens, the lower the level of understanding and easier for politicians to lead them. We are being administered by incompetence and our lives are managed by individuals without a sense of intelligence. The intellectuals are no longer in demand or perhaps, need. One of the reasons why democracy in Nepal is in crisis is the lack of attention to people in both geographic and social peripheral areas. Many of the people living in rural areas, where people live in constant poverty are enjoying less freedom, including restriction and circumscription of human rights.

We believe democracy is synonymous with freedom. In reality, the democracy we have is a form of collectivism or "one size for all." Our representative system is far from ideal and democracy is numerical superiority. It's about maximizing the army of voters to win every time. Our democratic leaders think freedom is an absence of interference from others. In reality, freedom is not the absence of interference; it is the absence of domination. Tolerance and indulgence are the most important foundations of democracy.

In order for democracy to function, citizens need to be aware of their rights and freedoms, the rule of law and equality before the law function. The media enjoys great freedom of speech, in the verbal and written sense, independent from any government. In a liberal democracy, the realization of the greatest possible individual freedom is paramount. Its key features are the fact that many are trampling the rights of minorities and that the government does not fulfill its duty of accountability. As a result of this, the distance between the elite and society in Nepal has increased in the last few years. Our democracy does not democratically treat the people who are raising the issues to fix the system.

We live in a time where everyone writes, and nobody reads because opinions are cheap but facts are expensive. Our own political leadership is eroding the democratic norms of our country, and we are not realizing it. There are no democracies without free, diverse and independent media. Journalists need an environment where they can work safely, without fear of harassment, political pressure, censorship or persecution.

The current democracy is failing because we are voting for ideologies, not ideas. The biggest problem with ideology is that the people we have in our political spectrum do not produce any good ideas. The sad reality is that democracy is shrinking to the voting process only and voting is nothing but a numerical majority.

PM Deuba Wins Vote Of Confidence In HoR By Agencies 1 week, 4 days ago

UML POLITICS Divided We Stand By A Correspondent 1 week, 6 days ago