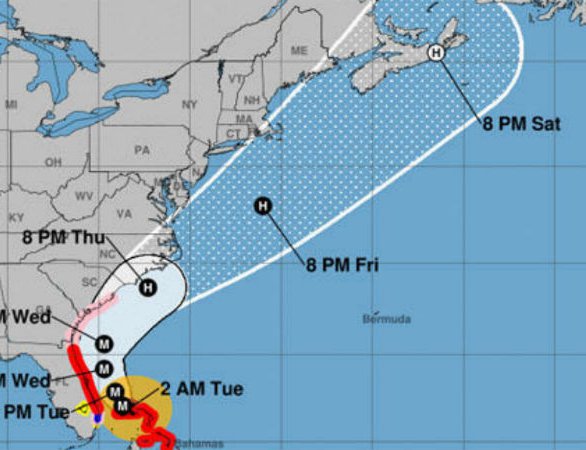 Hurricane Dorian is the most powerful storm that has ever struck the Bahamas with winds to the tune of 300 kmph. Dorian was downgraded to a category 4 Hurricane on Monday.

It has been a mess in terms of track, intensity, and landfall. It has been a testing time for all the meteorologists and the forecasters. Earlier, Dorian was supposed to hit Florida, after which it seemed that the storm will head towards Carolina.

Such strong systems have the catastrophic potential to bring in damage at a huge scale. Hurricane Dorian has stalled over the island of Grand Bahama for a day, staying in roughly the same position for 12 hours.

At present Dorian is 100 km away from Florida. As of now, it seems that it is on a recurving track wherein the state may not witness the direct hit as it has downgraded from Cat 5 to Cat 4. Five people are confirmed to have died in the storm. Storm surges of 25 feet (4-5 meters) above normal hit Grand Bahama Island.

Up to 13,000 homes have been destroyed or severely damaged. The evacuation orders are in place in Florida, South Carolina, Georgia, and Virginia. Also, more than 1,300 flights have been canceled in the US as well as to and from the country.

Dorian is expected to move dangerously close to the Florida coast late Monday through Wednesday evening and then move north to coastal Georgia and South Carolina on Wednesday night and Thursday.