With improvement in his health, Prime Minister K.P. Sharma Oli seems to be taking a new move 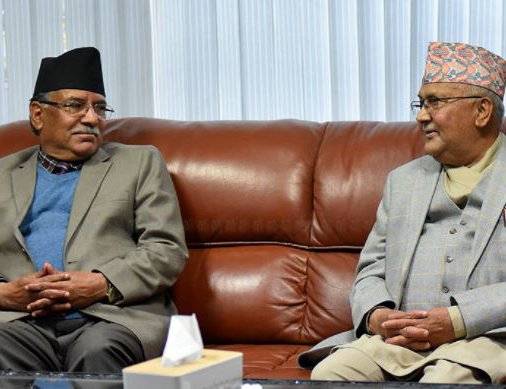 Although everything seems alright on the surface of politics, recent activities indicate that something is moving beneath the carpet. As is said, politics is a game where the results will be different from what one can see in action.

After taking the authority of chairman from Party co-chair PM Oli, Pushpa Kamal Dahal has made efforts to activate the party organization. He summoned three quick meetings of central secretariat and announced a number of decisions to hold rallies in different parts of the country. Discarded by his former colleagues, former prime minister Nepal also paid visit to Prachanda.

As Prachanda has been taking moves to activate the party, two senior leaders, vice-president Bam Dev Gautam and General Secretary Bishnu Poudel, left for Singapore for a political parley.

It is yet to be made public whether Gautam and Poudel were invited by PM Oli or they visited Singapore on their own. However, the visit that has taken place just three days before the return of PM Oli from Singapore is politically significant.

Although Minister for Energy, Water Resources and Irrigation Barsha Man Pun also paid a visit to Singapore on Sunday, meeting PM Oli there, it is yet to be known what PM Oli and minister Pun discussed in Singapore.

As shrewd and bold as he is, PM Oli's new move to invite Gautam and Poudel may have some political meaning and it also indicates that PM Oli will make certain political moves.

Whether the visit of Gautam and Poudel may have anything to do with political rivalry or not, their visit is likely to create in Prachanda some misunderstanding with Gautam and Poudel. Reportedly playing a crucial role in party unification, Poudel and Gautam are close to Prachanda.

Similarly, he promoted former home minister Bam Dev Gautam to the post of vice-president of Nepal Communist Party. He has also handed over chairman's power to co-chair Pushpa Kamal Dahal. This is normally against the past traditions.

As equations and alliances are in the process of making and breaking in newly unified NCP, where previously Maoist and CPN-UML hardcore cadres are minimized in party's front line, nothing can be impossible.

At a time when Prachanda, losing his control over his former colleagues, and Oli, pushing his loyal and hard core former UML party colleagues, the party is creating a new block of deserters like Gautam and Poudel of UML and many others from former Maoist.

In this scenario, the visit of Gautam and Poudel will have a lot of political meaning.

REINSTAMENT OF HOUSE Coalition Politics By A Correspondent 3 days, 9 hours ago