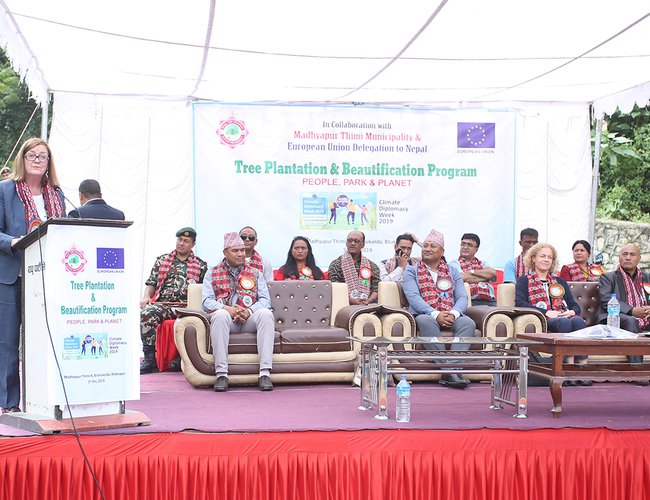 The Delegation of the European Union to Nepal joined the Madhyapur Thimi Municipality in tree plantation activities as part of the Climate Diplomacy Week 2019 on the theme “People, Park and Planet”.

The EU Delegations around the world mark the Climate Diplomacy Week from 24 September to 6 October and reach out to communities and partner organizations, highlighting positive global action and collaboration on climate change. Several events are taking place focusing on climate action in the EU and beyond. 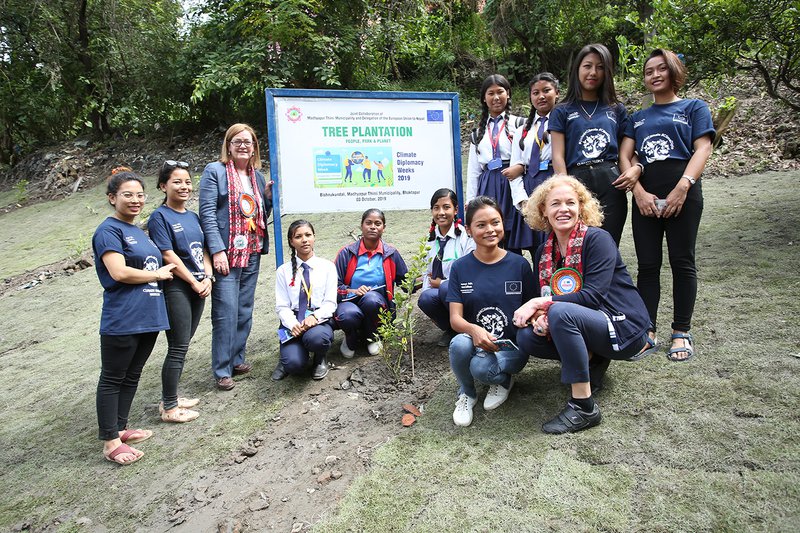 This year, the Delegation of the European Union to Nepal staff joined the children and community of Madhyapur Thimi Municipality to plant trees and design a park in a bid to bring positive changes to Thimi. The involvement of the Thimi youths and local communities in the clean-up activities and preparations for the event highlights their interest to preserve the surrounding environment and contribute to expanding greenery in their municipality.

Addressing the event, EU Ambassador to Nepal Veronica Cody, said: “Climate change is a direct and existential threat. It spares no country and requires a collective response. The world is already witnessing multiple devastating impacts of climate change, affecting lives and livelihoods of people, human health, biodiversity, and cultural heritage. While countries around the world have been mobilizing to counter the effects of climate change, global action still remains insufficient. The EU is therefore increasing and intensifying its efforts to combat the climate change process inside the EU and in partner countries. We want to mark this Climate Diplomacy week in Nepal by working together with all of you here today, - the Mayor of Thimi, the community of the Municipality and especially its youth - to make a green and beautiful contribution to this town. " 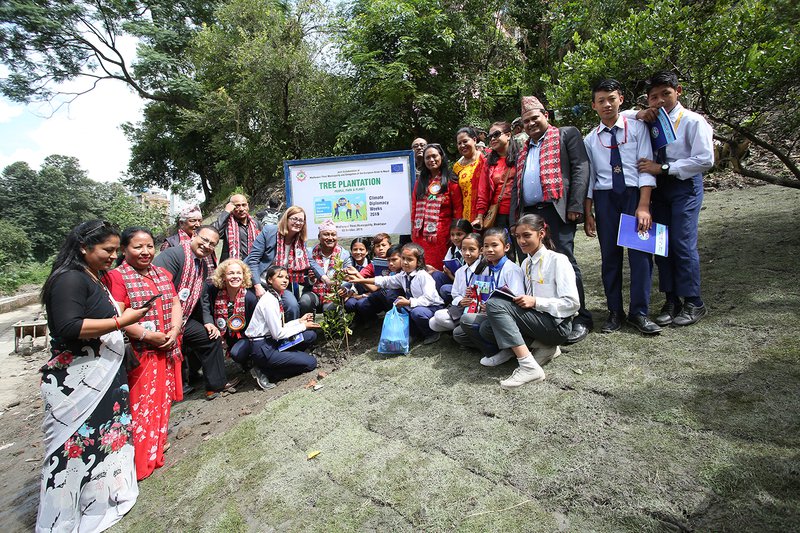 Welcoming the guests and local communities, Madan Sundar Shrestha, Mayor of Madyapur Thimi Municipality, said: “The air pollution level has gone up in Bhaktapur compared to Kathmandu due to the expansion of urban settlement and the running of brick kilns. Although the city is rich in cultural heritage, temples and historical monuments, unfortunately it is home to over 120 brick kilns that are adversely impacting the life and livelihoods of the people and the city's artifacts. Against this backdrop, our efforts to set up a park and plant trees is a meaningful step forward to bring down the pollution level and re-establish a green Bhaktapur. This dream of a green Bhaktapur can come true only through the concerted efforts and support of the local communities, government and private authorities, ” he added.

The EU has been in the forefront of climate action and is keen to promote a learning dialogue and build support for the structural change necessary for the transition to low-carbon-emission, climate-resilient societies, particularly among younger generations whose futures are the most threatened by climate change. Young people stand to profit the most from this transition.

Chanda Led Maoist And The Government To Hold Talks By NEW SPOTLIGHT ONLINE 1 hour, 38 minutes ago

Nepal Is Committed To End All Kinds Of Discrimination: Foreign Minister Gyawali By Agencies 6 days, 1 hour ago