Ahead Of Xi's Visit, China Says J&K Issue Should Be Resolved Bilaterally

Ahead Of Xi's Visit, China Says J&K Issue Should Be Resolved Bilaterally 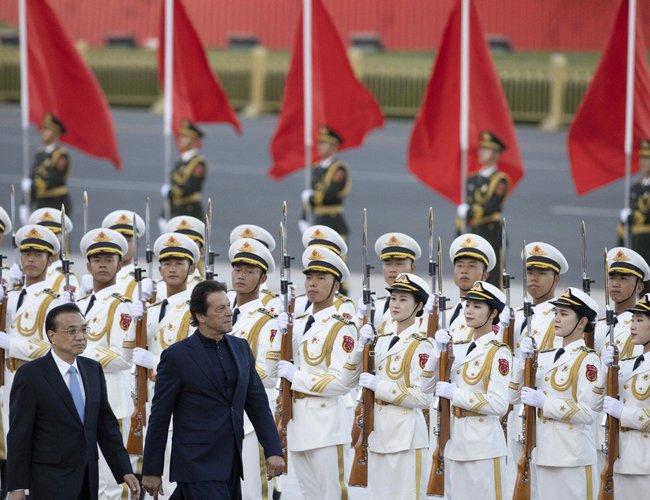 China said India and Pakistan should resolve the Kashmir issue through dialogue and consultation. Pakistan's Prime Minister Imran Khan is in Beijing for talks with Chinese Premier Li Keqiang and President Xi Jinping.

Mr Xi is also scheduled to visit India later this week. Both China and Pakistan were critical of India's move in August to revoke autonomy in the part of Kashmir under its control.

As Pakistan Prime Minister Imran Khan arrived in Beijing Tuesday for talks with Xi Jinping ahead of the Chinese President's important visit to India, China said the Kashmir issue should be resolved between New Delhi and Islamabad, significantly omitting its recent references to the UN and UN Security Council resolutions.

Chinese Foreign Ministry spokesman Geng Shuang during his media briefing on Tuesday did not make any official announcement about Xi's visit to India.

However, Chinese officials informally said an announcement would be made simultaneously in Beijing and New Delhi on Wednesday.

The Chinese Foreign Ministry has also called for a special media briefing on Wednesday on "Chinese leader's outbound visit".

"India and China have a tradition of high-level exchanges. Both sides have communication exchange over high-level Visit. Any new information will be released soon," Geng said in response to questions on Xi's visit to India.

"Since the Wuhan informal summit (last year), our bilateral relations have gathered good momentum," he said.

"We have been advancing our cooperation and properly managing our differences. We have a tradition of high level exchange and our two sides are maintaining communication on high level exchange in the next phase. We should make good atmosphere and environment for this," he said.

When asked about Imran Khan's visit to Beijing ahead of Xi's trip to India and whether the Kashmir issue will figure in his talks with the Chinese leaders, Geng said that China' stand is that the Kashmir issue should be resolved between India and Pakistan.

"And so you are paying attention to the Kashmir issue, right? China's position on Kashmir issue is clear and consistent", he said.

"We call on India and Pakistan to engage in dialogue and consultation on all issues including Kashmir issue and consolidate mutual trust. This is in line with interest of both countries and common aspiration of the world," he said.

His comments marked a significant shift on what China has been saying on Jammu and Kashmir in recent weeks in the aftermath of India's move to revoke the state's special status under Article 370 of the Constitution.

Geng's comments on Tuesday marks China's return to its original stand that Kashmir issue should be resolved bilaterally.

Observers say it is significant shift ahead of Xi's visit to India for his 2nd informal summit with Prime Minister Narendra Modi. On Imran Khan's visit, Geng said China attaches "great importance" to his trip.

Imran Khan arrived in Beijing on a two-day official visit to China during which he would meet the country's top leadership including President Xi and discuss issues of regional and bilateral significance.

Their visits came ahead of Xi Jinping's planned visit to India.

"China and Pakistan are all weather strategic cooperation partners. We have good tradition of close exchange and communication. We have strategic mutual trust and advancing practical cooperation. Our cooperation in CPEC is bringing more outcomes to our peoples," he said.

Tensions between South Asian neighbours remain high after New Delhi moved to strip Jammu and Kashmir of its special status.

Beijing has vowed to support Pakistan in “safeguarding its independent sovereignty and territorial integrity” as Prime Minister Imran Khan began a two-day visit to China to win backing for his country’s stance on Kashmir.

Khan arrived in Beijing on Tuesday morning in his third visit to China since he became prime minister in August last year.

Mayhem In US Congress Blackest Day By Keshab Poudel 2 weeks, 3 days ago

New Zealand Rings In 2021 As New Year Celebrations Kick Off Around World By Agencies 3 weeks, 3 days ago

Chinese Economy To Overtake US 'By 2028' Due To Covid, India Tips To Become Third Largest Economy By 2030 By Agencies 4 weeks, 1 day ago