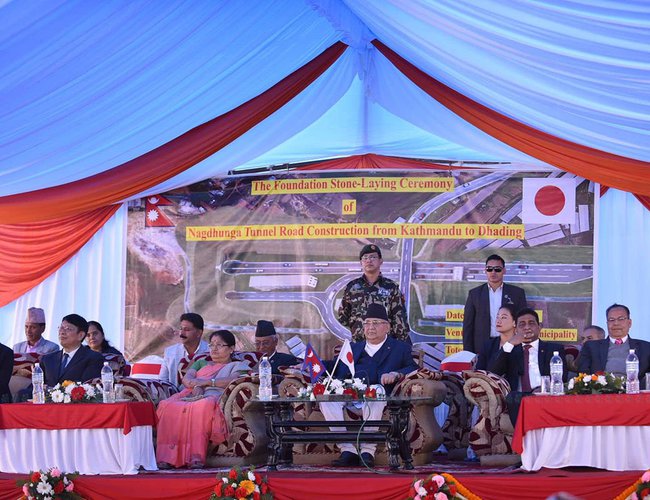 Ambassador of Japan to Nepal Masamichi Saigo and the Chief Representative of JICA Nepal Office, Ms. Yumiko Asakuma were also present during the ceremony.

During the ceremony, the Prime Minister expressed special appreciation towards Government of Japan and JICA for its support in constructing this landmark project, and stated his belief that this breakthrough project will immensely help in improving the trading of goods through smooth vehicular movement for commercial activities and bring prosperity in the economic condition of the country.

The foundation stone laying ceremony for Nagdhunga Tunnel Construction Project was held in the eastern portal of the tunnel way located in Chandragiri Municipality.

The Nagdhunga Tunnel Construction Project is an ODA loan project funded by the Government of Japan where JICA is the development partner providing loan assistance of JPY 16.636 billion. The objective of the Project is to improve the road condition around Nagdhunga pass by constructing a tunnel, thereby contributing to achieve the smooth transportation network between Kathmandu and other principal cities/areas in Nepal.

The commencement of this tunnel project will be first of its kind in Nepal. The highway will have two lanes , 2.7 kilometers in length and is expected to reduce the time to clear Nagdhunga Pass to one-third of the current time (currently 30 minutes when heading east and 20 minutes when heading west), making the transportation of people and goods efficient and safer. The executing agency for this project is the Ministry for Physical Infrastructure and Transport and the construction period is expected to be around 3.5 years.

PM Oli Adopted A Rhino By Agencies 2 days, 12 hours ago

338 Households Displaced In Fungling Due To Fire By Agencies 3 days, 1 hour ago

Chanda Led Maoist And The Government To Hold Talks By NEW SPOTLIGHT ONLINE 3 days, 12 hours ago