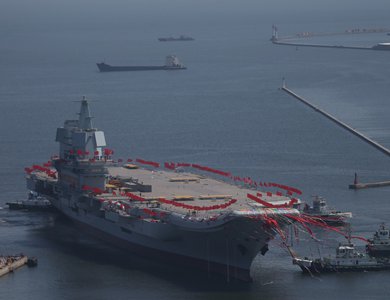 China’s second aircraft carrier, the country’s first domestically built one, the Shandong (hull 17), was delivered and commissioned to the People’s Liberation Army (PLA) Navy on Tuesday in Sanya, South China’s Hainan Province, after refitting and sea trials since its launch in 2017.

According to Xinhua news agency, despite Shandong’s commissioning, China’s aircraft carrier development still lags far behind that of the US, which operates 11 super carriers in Nimitz and Ford-classes. They are nuclear-powered and have displacements of over 100,000 tons.

The Xinhua News Agency first reported in November 2018 that China was building a new type of aircraft carrier. Jin Yi'nan, a professor at National Defense University of the PLA, said on CCTV in November that the third carrier is under construction at Jiangnan Shipyard in Shanghai.

Military experts speculate the third carrier could have a displacement of around 80,000 tons, use flat deck with electromagnetic catapults to replace the ski-jump deck, thus making it capable of carrying more aircraft in terms of both number and type, and launching fighter jets more efficiently.

China could eventually operate around six carriers, as later entries could become nuclear-powered, they predicted.

Chinese military enthusiasts are also hoping China would develop a next generation aircraft carrier-based fighter jet, which they believe should be stealth-capable and could rival the US’ F-35B and F-35C.

The commissioning marked China’s entry into an age of double carriers, an achievement only a few countries in the world have accomplished and will enrich the Navy’s tactical and strategic choices in time, space and sheer power, experts said.

Construction of China’s first domestically built aircraft carrier the Shandong, began in November 2013. It was launched in April 2017 at the Dalian Shipyard, Northeast China’s Liaoning Province.

In May 2018, the ship set out for its first sea trial. It conducted eight more sea trials, with the ninth one in November this year that saw the warship leaving Dalian, heading south, passing through the Taiwan Straits, entered the South China Sea, and finally arrived in Sanya, its mother base.

Military analysts believe the Shandong was built based on the experience of China’s first carrier, the Liaoning, which was an incomplete Soviet ship that China purchased and completed construction.

Having a displacement of around 40,000-60,000 tons and using a similar ski-jump flight deck as the Liaoning, the conventional-powered Shandong is equipped with more advanced electronic devices and control and command system, and built with an optimized superstructure and internal layout, after gaining actual-use experiences following the Liaoning’s commissioning in 2012, analysts said.

Thanks to these significant improvements, the second carrier is not a copy of the first one and is much more powerful. For example, it can carry 36 J-15 fighter jets, compared to the Liaoning’s 24, according to a China Central Television (CCTV) report in August.

Military experts pointed out that the commissioning of the Shandong also made China the first Asian country to operate an independently developed aircraft carrier after World War II.

Technical aspects aside, the more imminent impact the commissioning of the Shandong has on the PLA Navy is that the Navy now has an additional aircraft carrier, which gives the Navy more tactical and strategic options in using carriers. 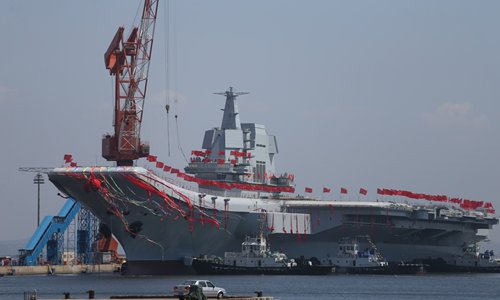 Having one carrier in the east and another in the south will ensure fast reaction time when the presence of an aircraft carrier is needed, a military expert who asked not to be named told the Global Times.

The US has been frequently sending warships and aircraft into Chinese territorial waters and airspace in the South China Sea, and China could use the carrier as a deterrent, the expert said.

The second aircraft carrier based in the south can effectively patrol the South China Sea, protect islands and reefs there and act as a strategic foothold at sea, Beijing-based military analyst Wei Dongxu told the Global Times.

One carrier could also stay near the mainland for alert missions, while the other could sail farther away into high seas for long-range missions, analysts said.

In terms of time, regular maintenance is needed for a carrier to stay combat ready. When one carrier is under maintenance or repair, the other could take over its missions so China will always have a carrier to deploy, Li pointed out.

Another new choice is to let the two carriers form a dual-carrier battle group for maximum combat capability.

Li said a dual-carrier battle group will boost China’s maritime combat capability, because a moderate or more intensive regional conflict, especially in high seas, requires at least 45 carrier-based aircraft to achieve regional air and sea superiority, which is not possible with a single Chinese aircraft carrier.

Together with escorting guided missile destroyers like the Type 055 and Type 052D, frigates like Type 054A, as well as submarines and supplemental ships, the aircraft carriers could provide formidable power that China did not have in the past, the anonymous expert said.

China’s aircraft carriers will sail into the high seas farther away from its mainland to safeguard crucial sea lanes that are used for trade and protect China’s growing overseas interests like cooperation projects, investments and overseas citizens, the anonymous expert said, noting that aircraft carriers can complete these tasks more efficiently than smaller ships like destroyers and frigates.