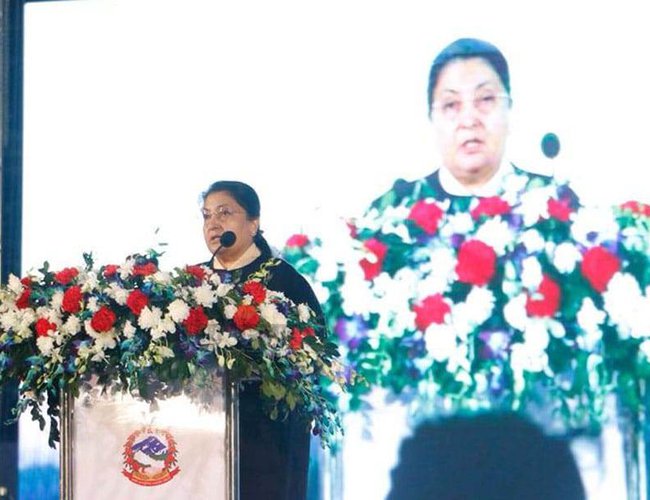 Inaugurating the VNY 2020 President Bhandari urged to take benefits from protecting nature and tourism rather than destroying them. She said that there need to have coordination and cooperation to make the VNY 2020 a success.

She said that if we are unable to properly manage the tourists in our destination, it will be turned into a major challenge for future.

To make the VN 2020 campaign successful, the government has introduced new destinations, organized national and international sales missions and appointed brand ambassadors for the event while the private sector has offered discount packages for the year-long campaign.

The event is being supervised by the VN 2020 campaign secretariat under the Ministry of Culture, Tourism and Civil Aviation in association with Nepal Tourism Board.

Targeting to go beyond the regular products, MoCTCA has introduced 100 new tourist destinations. The ministry had conducted meetings with more than 100 governmental and non-governmental organizations requesting their support to promote this campaign in their respective areas.

Although the VN 2020 promotion has created quite a buzz within the country, the government is yet to put in the required effort to promote the campaign in the international market, said Vinayak Shah, first vice-president of Hotel Association Nepal.

At a time when preparations to the official inauguration of the Visit Nepal Year (VNY) 2020 are going on in full swing, the government has asked the people to illuminate their houses in the evening of January 1 to welcome the national campaign.

Minister for Culture, Tourism and Civil Aviation Yogesh Bhattarai asked the people to welcome the Visit Nepal Year (VNY) by illuminating their houses and to express their solidarity in the national campaign.

“The brightness of the lights will give a message of our new journey,” he added.

He said the announcement of the tourism year would be made from all the seven states by organizing formal events. “I ask the people to welcome the VNY by illuminating their houses and take part in the national campaign,” he added.

“The government is just a facilitator. All the political parties are the organizer of the campaign,” he added.

He further added that the government had been preparing to introduce policy provision to mark the upcoming decade as a tourism decade.

Coordinator of the VNY 2020 Secretariat, Suraj Baidhya highlighted the importance of the program.

Various cultural events showcased in the event, while the tourism ministers of other foreign countries will express their commitment.

The country aims at developing hundreds of new tourism destinations during and after the VNY and aims to reach a new ambitious record of two million tourists by the end of 2020.

The government has also targeted to enhance the tourism sector’s contribution to the Gross Domestic Product (GDP) to 10 per cent from present 3 per cent and increasing the share of tourism in employment.

In his address to the meeting of tourism ministers of various neighbouring countries including India and China, who have arrived in Kathmandu to participate in the inauguration of Visit Nepal Year, 2020, PM Oli said the issue would be drawn to the world through the Sagarmatha Sambaad slated for the first week of April, 2020 in Nepal to hold a multi-stakeholder dialogue on climate change.

The meeting held at Prime Minister's official residence in Baluwatar was attended by Representative of the Ministry of Culture and Tourism of the People's Republic of China, Wang Xiaofeng, Minister of State for Culture of India, Prahlad Singh Patel, Minister for Hotels and Tourism of Myanmar, U Ohn Maung, minister of Jamaica and director generals of tourism departments of Bhutan, Cambodia and Qatar.

Stating that Nepal has been pursuing prosperity alongside social justice and equality, ending political inequality following big achievements in the country, he said the country's national campaign is speedy economic growth rate, and it wanted to increase the gross domestic product through tourism.

Nepal Is Committed To End All Kinds Of Discrimination: Foreign Minister Gyawali By Agencies 2 days, 8 hours ago