George Floyd killing: Protests Spread Across The US

George Floyd killing: Protests Spread Across The US 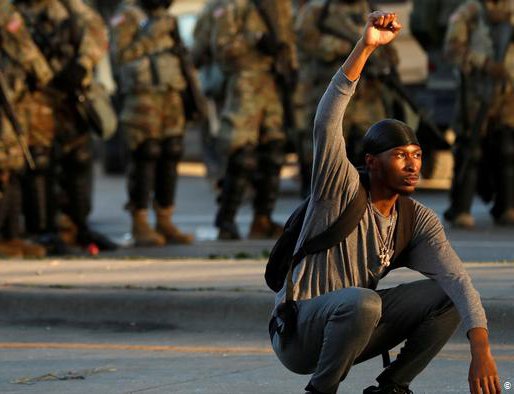 Protests, some violent, have escalated across the United States with people angry at the killing in police custody of unarmed black man George Floyd. One police officer has been charged with murder.

Protests swept across the United States on Friday as people demonstrated against the killing of George Floyd while in police custody. Peaceful rallies in Arizona and Ohio turned violent as protesters threw rocks, started fires and smashed windows in the early hours of Friday morning.

US media reported that the White House entered partial lockdown as protesters failed to leave after an 8 p.m. curfew in place in Washington, DC. People wielded signs reading "Stop Killing Us."

They couldn’t negotiate access to the east front plaza. Instead they’ve chosen to hold a vigil for Floyd with their phone lights raised as candles beneath the Capitol before moving on.

Meanwhile, over 200 people in Petal, Mississippi joined a peaceful protest Friday afternoon at city hall to call for the resignation of a white mayor who said he "didn't see anything unreasonable" about the killing of George Floyd in police custody.

In Phoenix, Arizona, authorities said that after hundreds of protesters marched towards the Capitol building, a small group broke windows at police headquarters in the early hours of Friday morning.

Protesters in Columbus, Ohio, Floyd's home state, attempted to break into the Ohio statehouse. Ohio Governor Mike DeWine issued a call to unity in the face of the protests, urging peace over the weekend.

"His death impacts all of us," he said. "We have a responsibility to each other, regardless of race, to stand up and say we won't tolerate conduct like this."

How did George Floyd die?

George Floyd was an African-American man who was killed in police custody in Minneapolis after footage emerged of him in handcuffs pleading for air as a police officer kneeled on his neck. Derek Chauvin, one of the four police officers, was arrested and charged with murder Friday morning following three days of protests.

Just an hour after his arrest, Hennepin County Attorney Mike Freeman announced that Chauvin had been charged with third-degree murder and manslaughter.

Freeman told a news conference that it was "by far the fastest we've ever charged a police officer."

How did the protests start?

The protests began in Minneapolis after the footage of Floyd's killing emerged earlier this week.

Governor Tim Walz of Minnesota announced a curfew over the weekend from 8 p.m. Friday to 6 a.m. Saturday and the same on Saturday night in an effort to curb violent protests and looting. Walz also acknowledged his "abject failure" in responding to the situation this week.

Former Officer Chauvin's actions were horrific. His arrest is a good first step toward justice for George Floyd. But it doesn't change the systemic problems and persistent inequities that led to his death or the pain our communities live with every day. We’re committed to change.

Presumptive Democratic presidential nominee Joe Biden called for justice in the death of George Floyd and described systemic racism as an "open wound" in the United States.

He also denounced President Donald Trump, who appeared to call for violence to quell looters in Minneapolis on his own Twitter platform.

Trump ally and US Attorney General, William Barr said Friday that he was "confident justice would be served" and that he found the video footage of Floyd's arrest "harrowing."

Protests are expected to continue over the weekend, with many activists on social media calling for the other three police officers implicated in Floyd's death to be arrested.

Columns Of Light Displayed In NY For 9/11 Victims By Agencies 4 days, 21 hours ago

Death Toll From Hurricane Ida Rises To 49 By Agencies 1 week, 6 days ago