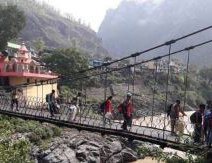 One thousand and forty-eight people have entered the country in the past three days from the Nepal-India border in Jhulaghat. They were rescued from across the border reports Rastriya Samachar Samiti (RSS).

The rescue work began on Thursday, with 189 Nepalis returning home on Saturday, said Chief District Officer Mohan Raj Joshi. On Thursday, 576 had come and 283 on Friday, most of them people working in various parts of India.

The people who were rescued have been sent to their respective districts and to their respective local level government in case of Baitedi district. All of them will be quarantined for 14 days and tested for Corona Virus before being allowed to reunite with their families, said assistant CDO Lokendra Singh Negi reports RSS.