Nepal Prime Minister K P Sharma Oli said Nepal was determined to reclaim Kalapani, Lipulekh and Limpiyadhura, territories it claims were encroached by India and now figure in its maps. 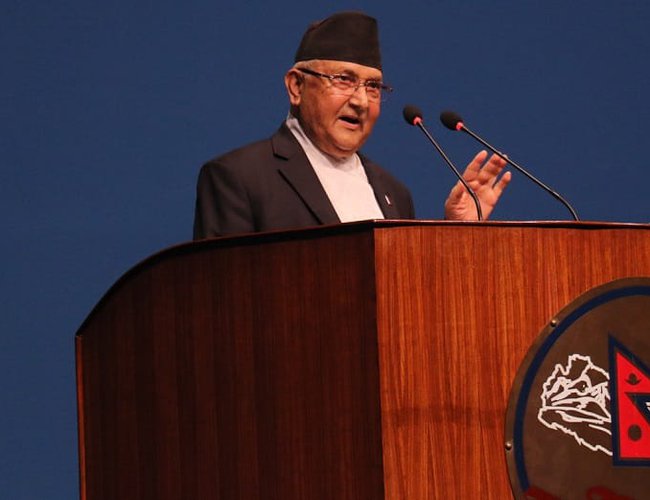 He said Nepal was determined to reclaim Kalapani, Lipulekh and Limpiyadhura, territories it claims were encroached by India and now figure in its maps.

Oli also slammed Uttar Pradesh Chief Minister Yogi Adityanath’s reported remark that Nepal should not repeat the mistake which Tibet made. He said it amounts to undermining Nepal’s sovereignty.

Responding to queries from members during a debate in the House of Representatives on the annual budget, Oli said India had claimed Nepalese territory by presenting a “fake” Kali river and stationed its Army there, but Nepal was determined to get its territory back. He said the whole country was one on the issue, which was proved by rare solidarity among members across party lines in the House.

All parties have expressed their support for the constitution amendment Bill to include these territories in Nepal’s map. Sarita Giri of the Madhes-centric Samajbadi Party had moved a proposal that the Bill be withdrawn — saying that the areas under dispute did not belong to Nepal — but she has since been instructed by her party to withdraw it or face disciplinary action.

Oli said that India was building dams along the border that would result in submergence of many areas on the Nepal side. “You cannot do it as per law, and as a good neighbour. We have warned India on the issue many times, and we are not going to tolerate any such unjust behaviour,” he said.

On Adityanath’s reported remarks, the Prime Minister said that if this has been reported correctly, it amounts to undermining Nepal’s sovereignty and “that is condemnable”.

On June 3, news agencies quoted Adityanath as saying that Nepal should not repeat the mistake made by Tibet. He said India and Nepal may be two different political entities, but they have one common soul. “The two countries have cultural, historical and mythological links that go back several centuries and Nepal should remember this,” he was quoted having said.

Oli also slammed reports in Nepal’s media about the alleged luxurious lifestyle of President Bidhya Devi Bhandari and her favours to his government. “Those criticising the President are the ones conspiring against Nepal’s republic order,” he said.

The President’s office, he said, is a dignified institution deserving all respect, and “such criticism is only part of the conspiracy against the republic”.

Manasalu Avilances: Fifteen Hurts One Died By Agencies 1 day ago

Government To Deploy Nepali Army During The Elections By Agencies 1 day, 23 hours ago