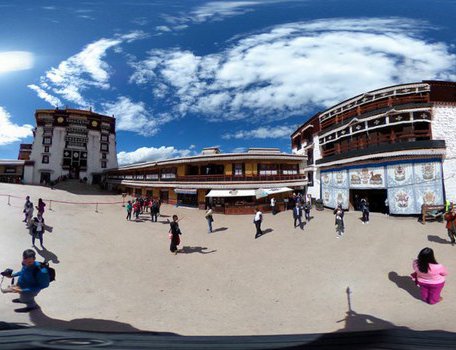 China’s clampdown on Tibetan rights and freedoms increased during last year, with a growing use of surveillance and online monitoring to suppress political dissent, and strengthened restrictions on Tibetan children’s right to classroom instruction in their own language, a new report by a Tibet advocacy group said Tuesday.

In spite of growing international condemnation of human rights violations in Tibet, “[the People’s Republic of China] continues with its policy of crushing any political dissent,” the Dharamsala-India based Tibetan Centre for Human Rights and Democracy said in its annual report reviewing developments in 2019.

Chinese policies and legislation in Tibet are used to systematically wear away and destroy Tibetans’ national and cultural identity, TCHRD said in its report, “The Human Rights Situation in Tibet,” adding, “[The] PRC’s actions in Tibet run directly counter to the international agreements it has signed and ratified."

Throughout the year, Chinese police forces and surveillance teams moved into monasteries and villages to monitor Tibetan residents for signs of opposition to China’s rule, TCHRD said, adding, “facial-recognition software and careful monitoring of digital spaces [were] deployed to suppress political protests against the increased clampdowns on civil and political rights.”

Meanwhile, Chinese authorities in Tibet and Tibetan areas of western China cracked down on political activists and environmental defenders under cover of a nationwide anti-crime campaign, resulting in a growing “chilling effect caused by the persistent criminalization of activities undertaken in defense of human rights,” TCHRD said.

China’s “deeply flawed” criminal justice system was also a focus for concern during the year, with Tibetans deprived of any right to a fair trial and “broad discretionary powers enabling law enforcement officers to engage in extralegal practices such as arbitrary detention, torture, and extracting forced confessions without any independent oversight,” the rights group said.

Restrictions on the use of Tibetan as a language of instruction in Tibetan schools in favor of Mandarin Chinese meanwhile violated the right of Tibetans to use their own language and to teach it to their children, TCHRD said, adding, “The policies and practices of 2019 suggest a future where Tibetans will be forcibly estranged from their own language, and as a consequence, their own culture.”

China has attempted to conceal its abuses in Tibet by limiting outside travel to the region and by blocking open discussion of Tibet’s political status at the U.N. and other public forums, trying especially to discourage foreign contacts with exiled Tibetan spiritual leader the Dalai Lama, TCHRD said.

The rights report came a day after 57 parliamentarians from 19 European countries called on their governments to pass a law barring access to Europe to Chinese officials who block foreign travel in Tibet, following 2018 U.S. legislation with a similar aim to press Beijing to open the Himalayan region.

Change Of Power In Afghanistan Not Inclusive: Indian PM Modi At SCO Summit By Agencies 21 hours, 36 minutes ago

Crisis Looms In Afghanistan One Month After Taliban Takeover By Agencies 3 days, 21 hours ago