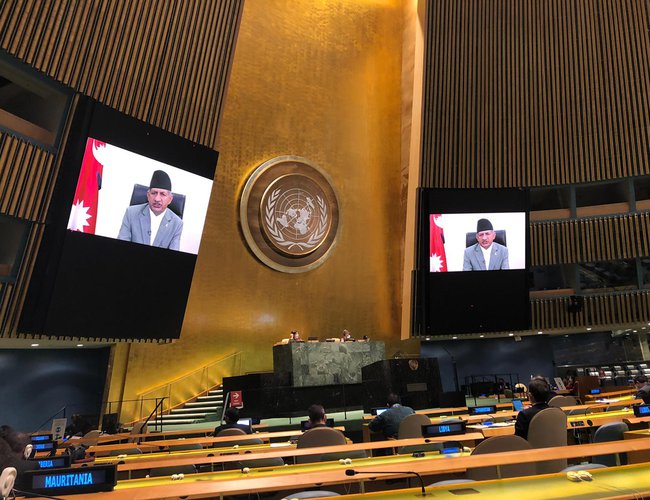 Minister for Foreign Affairs Pradeep Kumar Gyawali stressed that financial resources spent on nuclear weapons should be diverted to achieving the sustainable development goals for the overall security and wellbeing of humanity at large.

In his pre-recorded video address to the ‘High-level Meeting to Commemorate the International Day for the Total Elimination of Nuclear Weapons’ earlier today, the Foreign Minister said the world would never be a safer place as long as the specter of nuclear weapons loomed large.

Referring to the devastation caused by the current pandemic, he cautioned that nuclear explosion - whether accidental or intentional – could claim more lives within a wink of an eye. The scientific race for vaccines has kept our hope alive to win the war against COVID-19. But no vaccine will save us from the nuclear catastrophe, he contended.

The Foreign Minister reiterated Nepal’s call for a time-bound, general, and complete disarmament of nuclear and other weapons of mass destruction. He stated that nuclear technology should be harnessed for peaceful purposes of promoting health care, increasing agricultural productivity, and saving lives. He described peaceful use of nuclear energy and the complete disarmament as the two sides of the same coin.

The event held on the margins of the 75th Session of UN General Assembly featured a total of 110 speakers including 15 Heads of State/Government and 64 Ministers.

Over 93 Percent Results Of Local Poll Announced, Balen and Chiribabu Leading In Kathmandu And Lalitpur Respectively By Agencies 5 hours, 54 minutes ago

Only 10 Percent Of Results Remains In Local Level Polls By Agencies 1 day, 5 hours ago

Balen Shah Leading The Race with Over 4500 Votes By NEW SPOTLIGHT ONLINE 5 days, 5 hours ago