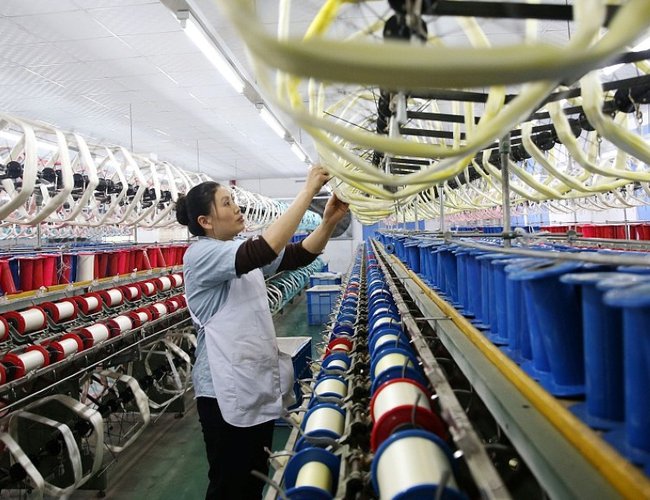 China's economic recovery gathered pace in the third quarter of 2020, with GDP growth in July-September registering at 4.9 percent from a year earlier, boosted by investment and exports, official data showed Monday.

The growth beat the second quarter's 3.2 percent, which reversed the first contraction on record at 6.8 percent in the first quarter. In the first half year, the economy declined by 1.6 percent, but it rebounded to a 0.7-percent rise in the first three quarters.

"The Q3 GDP growth accelerated from the first half, driven by infrastructure and real estate investment as well as a strong performance in export," Wang Dan, chief economist with Hang Seng Bank China told CGTN.

The reading was slower than the median 5.2-percent forecast by AFP's survey and Reuters' poll, and missed expectation of 5.3-percent growth by Bloomberg.

"In our view, the number missed the consensus forecast, partly because high volatility made forecasting difficult," Nomura's Chief China Economist Lu Ting said in an email to CGTN. He emphasized missing forecast does not mean China's economic recovery is hindered.

Lu said, "China's quick recovery was a product of its stringent lockdowns, massive testing, population tracking, a large economy that can afford to be somewhat insulated, and fiscal stimulus via credit expansion."

"Strong export growth, a further recovery from the pandemic, the lagged impact of fiscal stimulus and credit growth and pent-up demand following the summer floods all contributed to the robust activity data in September," Lu further explained.

ICBC International said behind the positive economic growth is the rebound in investment and consumption, as both of the fixed asset investment in the first three quarters and retail sales in the third quarter turned positive for the first time this year.

The National Bureau of Statistics (NBS) said in a release that, "Generally speaking, the overall national economy continued the steady recovery and significant results have been delivered in coordinating epidemic prevention and development."

In the first three quarters, the country's added value of major industrial enterprises grew 1.2 percent from a year earlier. Industrial output increased 6.9 percent in September on an annual basis, 1.3 percentage points higher than the rise in August, much stronger than Nomura's expectation at 5.7 percent.

"We expect growth of industrial production to moderate back to around 6 percent year-on-year in coming months, as the restocking period is likely over and as pent-up demand eases," Nomura said.

Growth of retail sales quickened to 3.3 percent year-on-year in September, versus a 0.5-percent growth in August. It beat market consensus of 1.6 percent, and closed to Nomura's forecast of 3 percent. However, retail sales in January-September contracted 7.2 percent from a year ago.

The breakdown shows that growth in retail sales and revenue from catering services improved in September to 4.1 percent and -2.9 percent respectively year-on-year, from 1.5 percent and -7 percent in August, according to Nomura.

Sales growth of oil and oil products rose to -11.8 percent year-on-year in September from -14.5 percent in August, thanks to the gradual relaxation of social distancing rules that have supported the recovery in transportation and tourism industries, despite a fall in global oil price inflation, Nomura said.

ICBC International echoed that consumption will be further boosted in the fourth quarter, as more consumption scenarios and demand for offline services are expected to accelerate after China's Golden Week holiday, and residents' consumption capacity is expected to be steadily restored thanks to the monthly increase in new urban employment and the continuous rise in residents' income.

More than 630 million trips were made domestically during Golden Week from October 1 to 7, generating 466.6 billion yuan ($69.5 billion) in revenue.

"The third quarter saw some mini-second waves of coronavirus outbreak in a few cities, but they were quickly contained. Private investment thus accelerated, as the market reinforced confidence that China has the pandemic under control," Wang told CGTN.

Nomura expected infrastructure investment to accelerate, as the government could ramp up its spending of the proceeds from bond issuance in previous months, while manufacturing investment may remain subdued amid elevated uncertainties surrounding U.S.-China relations.

The official urban surveyed unemployment rate edged lower to 5.4 percent in September. From January to August, 7.81 million urban jobs have been created.

"We are well-positioned to achieve the target of creating 9 million new urban jobs for the entire year," Chinese premier Li Keqiang said at the State Council's executive meeting on October 10.

China's official manufacturing PMI increased to 51.5 in September, with the new export orders sub-index rising above the 50.0-mark for the first time since the COVID-19 outbreak. The Caixin services PMI for the month was further raised to 54.8, the highest reading since June and staying in expansionary territory.

China's retail inflation rose by 1.7 percent from a year earlier in September, contracting by 0.7 percentage points from August, due to moderating prices of vegetables and pork. The country's factory gate price edged down to 2.1 percent in annual terms for the eight straight months in September.

Russian Forces Claims Mariupol Steel Plant is Under Their Control By Agencies 2 days, 18 hours ago