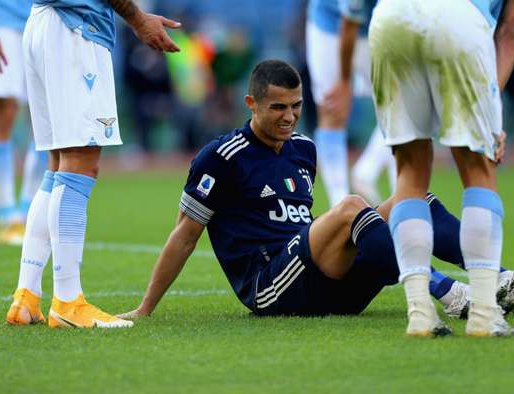 Juventus coach Andrea Pirlo has confirmed Cristiano Ronaldo suffered an ankle injury in the 1-1 draw with Lazio on Sunday.Goal

The Portugal star, who gave his side the lead in the first half at Stadio Olimpico, picked up a knock in a clash with Lazio midfielder Luis Alberto and was replaced by Paulo Dybala in the 76th minute of the game.

Pirlo could not give any details on the severity of the injury but told DAZN: "Ronaldo is a key player not only for us but for all the teams he has played for. Unfortunately, he had an ankle problem and was forced to leave the field."

The reigning Italian champions held on to their lead until the deep into second half stoppage time, when Joaquin Correa laid it off for substitute Felipe Caicedo to smash into the bottom corner and earn a point for the home side.

Pirlo was happy with his side's performance overall, but warned that such slip ups could cost them the Serie A title.

"We had a good match, they had never shot us on goal, there were no signs, but we have to take care of every little detail," the former midfielder said. "We didn't manage the ball in the last 10 seconds. We are satisfied with the game, unfortunately not with the result.

"The head comes first of all, today all the boys have given their best, shown that they can play these matches. if you go on to the pitch with a negative attitude, you have bad performances.

"We were missing the malice to achieve the decisive results. When they do it like they did today, they see the solutions.

"We are always working to improve, we put new ideas into every game. Today [Federico] Chiesa was unable to play, [Giorgio] Chiellini is injured and Alex Sandro and [Matthijs] de Ligt are out, but we can’t use these as excuses.”

Pirlo's men are now three points behind Serie A leaders AC Milan, who host Hellas Verona at San Siro on Sunday evening. Lazio, meanwhile, are ninth in the table and five points adrift of the Rossoneri.

Japan's Crown Prince Akishino has been proclaimed to the public as heir to the Imperial throne. It was the last in a series of ceremonies associated with the succession of the throne.

The Prince, whose given name is Fumihito, became first in the line of succession in May last year. That was when his older brother, Emperor Naruhito, ascended the throne after their father's abdication.

The ceremony to proclaim him Crown Prince was originally scheduled for April of this year. But it was postponed because of the coronavirus pandemic.

Sunday's ceremony was attended by adult members of the Imperial Family and the heads of the three branches of government.

Emperor Naruhito said, " I hereby hold the Ceremony for Proclamation of the Crown Prince and as provided by the Imperial House Law, broadly proclaim to the people in Japan and the world that Prince Fumihito is the Crown Prince."

The Crown Prince then expressed his resolve to fulfill his duties.

Crown Prince Akishino said, "I am truly humbled to be granted the occasion of the Ceremony for Proclamation of the Crown Prince. I extend my deep thoughts to the responsibility as Crown Prince as I continue to fulfill my duties."