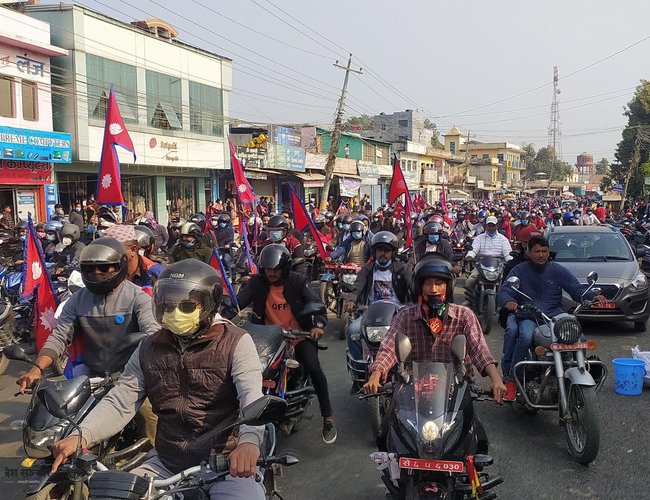 With a demand of restoration of constitutional monarchy and Hindu Kingdom, Patriotic Society organized a massive motorcycle rally in Dhangadhi. Started from Dhangadhi, capital of Sudupaschim province, the rally went to Attariya before converging as a mass meeting in Dhangadhi reports Deshsanchar.

According to organizer Rabindra Karki, coordinator of Sudurpaschim Independent Patriotic Society, the motorcycle rally was held demanding the dismissal of current republican and federal structure.

He said that large numbers of youth took part in the rally for the restoration of constitutional monarchy and Hindu Kingdom reports Deshsanchar. Karki also reportedly told to Deshsanchar that youths from all seven districts of Sudupaschim came to take part in the rally.

Spokesperson of the society Ashok Malla told Deshsanchar that more than 1000 four wheelers and 3000 motorcycles were in the rally.

Balen Shah Leading The Race with Over 4500 Votes By NEW SPOTLIGHT ONLINE 5 hours, 20 minutes ago

Nepal And India To Sign Five MoUs By Agencies 1 day, 1 hour ago