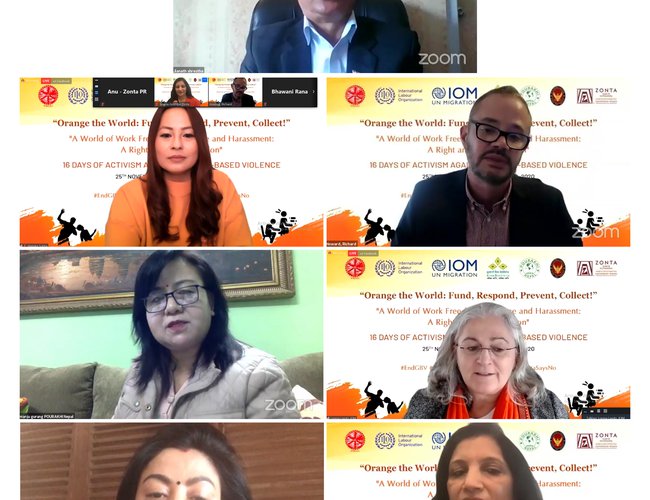 Zonta Club of Kathmandu is organizing a campaign to raise awareness to end violence against women in the world of work in both formal and informal sectors to mark the 16 Days of Activism Against Gender-Based Violence 2020,

The theme of the campaign is “Orange the World: Fund, Respond, Prevent, Collect!” “A World of Work Free from Violence and Harassment: A Right and An Obligation”. Since violence against women and children is a grave violation of human rights, from 25 November to 10 December, every year, actions are galvanized to prevent violence against women and girls around the world through the 16 Days of Activism against Gender-Based Violence Campaign.

Minister, the Chief Guest of the program, praised the organizations for forging partnership to raise awareness on this crucial issue.

The event was hosted by Malavika Subba, a renowned media personality. The campaign materials were also launched during the inauguration by the organizers.

During the event, Seema Golchha, President, Zonta Club of Kathmandu shared, “Zonta Club of Kathmandu is pleased to collaborate with the esteemed organization to raise awareness and to influence action to help create a safe and harmonious work environment for women. In addition to raising awareness on violence and vulnerabilities faced by women workers in both formal and informal sectors, it is important to keep everyone informed about available support mechanisms.”

“We, the UN family, are happy to join hands with civil society organizations and private sector in an effort to eliminate all kind of violence against women and girls with focus on those working in informal sector, the most vulnerable ones”, said Ms Lorena Lando, IOM Nepal Chief of Mission.

“Through various mediums like Nepal’s most popular communication channel - radio as well as social media channels, we will reach out to hundreds of thousands of Nepali migrants working abroad,both in formal and informal sector as well as migrant communities back home, encouraging them to raise their voice against all kind of violence through messages, experience sharing, and dialogues” she added.

Dr. Richard Howard, Director, ILO Nepal said that violence and harassment in the world of work is the antithesis of decent work. It is a threat to the dignity, health and well-being of those who experience it, and for their families.

Neelima Shrestha, Chair, VAW Committee expressed gratitude towards the government for their endorsementof the program and the partner organizations for this meaningful collaboration.

During the 16 Days campaign, Zonta and the collaborating organizations will raise awareness on the Sexual Harassment at Workplace Prevention Act, 2015 of the Government of Nepal and on the rights, provisions and available support mechanisms for women working in both informal and formal sectors. Conducting virtual panel discussions targeting decision makers and youth; sharing messages and stories of women migrant workers through celebrity platforms, playing jingles, conducting radio programs, producing and distributing stickers are among the various activities planned to achieve the campaign objectives.