Nepal is staring at a constitutional crisis after PM KP Sharma Oli dissolved parliament in a bid to counter discord within the ruling party. 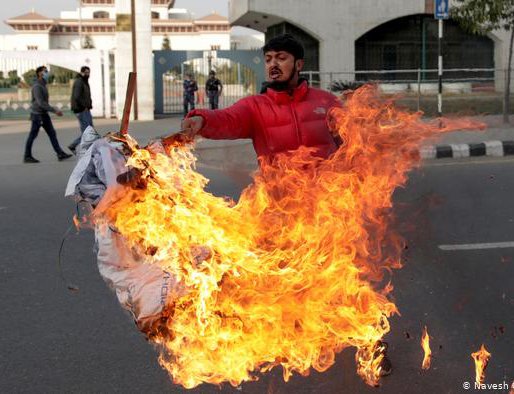 Nepal has plunged into a political crisis and renewed instability after President Bidhya Devi Bhandari dissolved parliament on Sunday at the request of Prime Minister KP Sharma Oli and announced general elections would be held in April and May next year, more than a year ahead of schedule.

The PM's decision has triggered unrest in his party and protests on the streets of the capital Kathmandu. It comes after months of clashes with Pushpa Kamal Dahal, a former insurgent leader who helped Oli come to power when their political parties merged in 2018. The pair had previously clashed over their power-sharing agreement and a lack of consultation.

Oli also lost support within his own Nepal Communist Party (NCP), with some members accusing him of sidelining senior party members in decision-making and key appointments. They called for him to step down.

Ninety parliamentarians from the ruling party rushed to register a vote of no-confidence after Oli sent his request to the president. Seven ministers have stepped down to challenge the dissolution and stated that it was a violation of the "popular mandate" given to them in the 2017 general election.

President Bhandari, who hails from the ruling party and is considered close to Oli, was also criticized for agreeing to Oli's dissolution recommendation quickly.

Observers say Oli's move has triggered a constitutional crisis as the prime minister cannot recommend dissolution of parliament until there are chances of forming an alternative government. They fear that recent developments could lead to a phase of renewed political instability in the Himalayan nation.

"This is an unconstitutional move, which has put the new political order and Nepali democracy at risk," Tikaram Bhattarai, a senior lawyer practicing in the nation's Supreme Court, told DW.

Constitutional law expert Bhimarjun Acharya told DW that the move could end up destroying the federal, republican setup that was institutionalized through the adoption of the new constitution in September 2015. "Only way now to correct the constitutional step is by reinstating the parliament through the court of law," he said.

Fresh elections are scheduled for April 30 and May 10, but PM Oli's former press adviser Kundan Aryal has cast doubt on the likelihood of holding elections on the announced dates due to political uncertainties and the coronavirus pandemic.

The crisis comes at a time when Nepal is facing a raft of political and security challenges, including an intensification of protests by former royalist forces demanding the restoration of monarchy — overthrown in 2008 — and the resurgence of violence by sprinter factions of ex-Maoist rebels.

The latest developments plunge Nepal into months of fresh political uncertainty after years of instability and short-lived governments that followed a decade-long civil war.

Oli came to power promising a stable and good government as well as swift economic development. But his administration's failure to deliver and allegations of corruption and political scandals have eroded faith in Oli's leadership. The authorities' handling of the coronavirus pandemic has also drawn criticism, and calls grew louder from within and outside the ruling party for the PM to step down.

Analysts believe both India and China would be closely watching developments in Nepal. Ties between Nepal and China have been on the upswing over the past decade, particularly when it comes to trade, investment and regional connectivity. But Beijing's growing clout in the country has stoked concerns in New Delhi.

In the current fiscal year, over 90% of foreign direct investment (FDI) in Nepal is from China. Beijing pledged nearly $500 million (€436.9 million) in financial aid to Nepal in October last year when Chinese President Xi Jinping visited the Himalayan country.

China has already pumped millions of yuan into infrastructure and hydropower projects in Nepal. Both countries share ever closer trading relations and Nepal has signed up for the Belt and Road Initiative (BRI), a Beijing-led gigantic infrastructure program that includes the building and upgrading of transportation and commercial links.

China has also cultivated good ties to Oli's administration, while territorial disagreements concerning a piece of land in the Himalayan region have strained relations between Nepal and India over the past year.

Kathmandu then accused New Delhi of trying to "bully" Nepal and Oli blamed India for trying to unseat him by stirring intra-party feuds within his Nepal Communist Party. The Indian government and media, however, tried to portray Oli and his government as puppets of China.

To normalize the bilateral ties, New Delhi sent its top diplomatic and security officials to Kathmandu in October and November, including the head of India's external intelligence agency, army chief and foreign secretary.

Chandra Dev Bhatta, a Nepali political analyst, told DW that Beijing's growing clout over Kathmandu has become a matter of concern for New Delhi. Nevertheless, he states that China's influence will continue no matter whether there is a communist government in place or not. "Since the abolition of monarchy in Nepal, China has maintained good and parallel relations with all political forces," he added.

Putin Talks With French President And German Chancellor
May 29, 2022
Government Is Committed To Implement NHRC’s Recommendations: Home Minister Khand
May 28, 2022
Russia Military Advances To Control Another City In The Eastern Ukraine
May 28, 2022
I Will Make Kathmandu World’s Best City: Mayor Balen Shah
May 27, 2022
Forbes Listed Five Nepalis In Forbes’ 30 Under 30 From Asia
May 27, 2022

Ganga To Mississippi: Walking With The Rainbow By A Correspondent 3 months ago