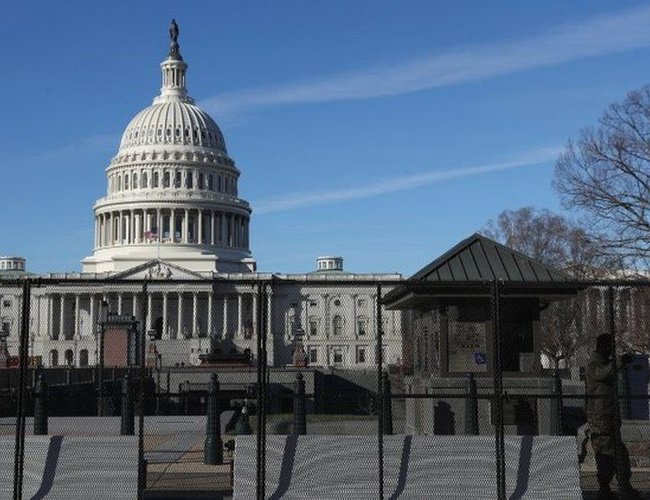 The FBI is warning of the possibility of armed protests being held across the US in the days before Joe Biden is sworn in as president.

There are reports of armed groups planning to gather at all 50 state capitols and in Washington DC in the run-up to his 20 January inauguration.

The fears come as security plans are hardened for the event itself.

On Monday, Mr Biden told reporters he was not afraid to take the oath of office outside of the US Capitol.

Both he and Vice-President-elect Kamala Harris are still expected to be sworn in outside the building, only two weeks after it was the site of a deadly raid by radical supporters of President Donald Trump opposing the election result.

Security officials are resolute there will be no repeat of the breach seen on 6 January - when thousands of pro-Trump supporters were able to break into the grounds of the complex where members of Congress were voting to certify the election result.

Chad Wolf, acting head of the Department of Homeland Security, said Monday that he had instructed the US Secret Service to begin special operations for the inauguration on Wednesday - six days early - "in light of events of the past week and the evolving security landscape".

Officials say up to 15,000 National Guard troops could be made available to fortify the event.

Later on Monday, Mr Wolf became the third Trump cabinet secretary to step down since the Capitol riots, after Betsy DeVos and Elaine Chao.

Mr Wolf's exit plunged his department into turmoil just as it gears up to handle security for the Biden inauguration. Mr Wolf last week called on Mr Trump to "strongly condemn" the protesters who stormed Congress.

The outgoing secretary said his departure had been prompted by "recent events", including court rulings challenging the legal validity of his appointment.