Elections Is Just A Month Away: Alliance Is Making Is Making

As Elections Is Just A Month Away: Alliance Is Making Is Making 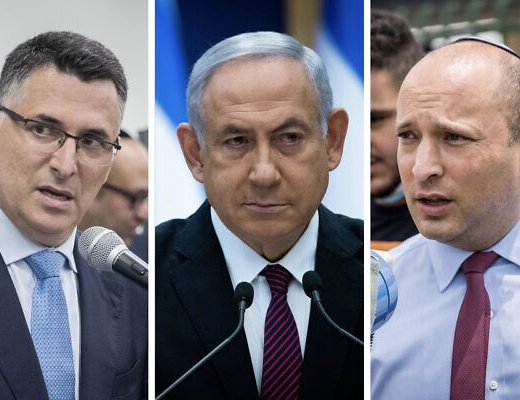 As race enters its final month, Netanyahu is seeking to funnel away right-wing votes from his challengers, but may have wound up pushing Yamina and New Hope closer to each other

At long last, four weeks to election day, Yamina party leader Naftali Bennett finally clarified on Wednesday whom he would support for prime minister (beside himself, of course).

Or, rather, whom he would not support.

“Yamina will not sit in a government led by the left, including with [Yesh Atid leader Yair] Lapid as prime minister,” Bennett said in a radio interview with the Kan public broadcaster.

It was a surprise statement from Bennett, whose entire election strategy has until now been premised on remaining vague about his post-election plans (should he fail to win enough seats to become, as he hopes, prime minister himself).

That ambiguity, and the fact that Netanyahu lacked a 61-seat majority without him in polls, had made Bennett the “kingmaker” of the current election. But if he won’t back Lapid, is he still the kingmaker?

“Bennett is getting all tangled up,” explained Yoav Krakovsky, the head of Kan’s political desk. “He’s caving to pressure from the right… Despite saying he wants to replace Netanyahu, it appears he’s starting to move closer to Netanyahu’s sixth government.”

Another pundit deemed Bennett’s announcement about Lapid a “childish strategic mistake” that means Bennett “is no longer the kingmaker.”

One response from Yesh Atid, from MK Karine Elharrar, was even blunter: “Does anyone still doubt that the minute after the election he’ll be calling Netanyahu?”

For his part, Bennett assured listeners to his interview that he believed “the time has come to replace Netanyahu,” and said that he himself would replace him. “It can only come from Yamina,” he trumpeted.

But polls now give Yamina scarcely 11 Knesset seats, in fourth place behind Netanyahu’s Likud, Lapid’s Yesh Atid, and Gideon Sa’ar’s New Hope. If Netanyahu cannot form the next government, it seems unlikely that it would be Bennett who could. And Bennett knows this.

What happened? Did Bennett just hand the race to Netanyahu, as pundits and Yesh Atid lawmakers claim, or is he actually signaling support for someone else?

The answer lies in Likud. Likud’s campaign strategy has been fairly simple: Focus on Lapid, make the race a contest between right and center-left in order to draw right-wing voters back to Likud from rightist challengers Bennett and Sa’ar. Likud studiously ignored those right-wing contenders until recently, apparently reasoning that to brawl with them publicly would only strengthen their position as challengers to Netanyahu.

That was two weeks ago, when Likud ads focused on “unity” and warned ominously of a “left-wing” Lapid-led government.

Then the pro-Netanyahu bloc started to slip in the polls. A religious-right coalition of Likud, Shas, United Torah Judaism, Religious Zionism and Yamina could muster a 62-seat parliamentary majority in many polls two weeks ago. That’s now slipped below the majority threshold to 58 or 59 seats.

On the other side, small parties on the center-left hovering near the 3.25 percent vote threshold — that is, on the cusp of failing to make it into the next Knesset — have slowly improved their poll showing in recent weeks. Blue and White has risen to five seats. Labor is comfortably at six. There are reasons to think Ra’am’s low poll showing, at scarcely 2%, will not be borne out at the ballot box.

The pro-Netanyahu Religious Zionism party, meanwhile, continues to hover at four in most polls, dangerously close to the threshold.

As one campaign official from a right-wing faction told The Times of Israel on Thursday, “At the start of the month, Netanyahu would have been guaranteed a victory if two of the small center-left parties [Ra’am, Meretz, Blue and White, Yaron Zelekha’s Economic Party fell below the threshold. Now he needs at least

three in order to have that certainty.”

The slippage has sent Likud looking for a new strategy. Netanyahu has begun to target the five seats of one-time Likud voters he believes are polling with Sa’ar, as well as the right-wing voters now supporting Bennett.

Instead of focusing on Lapid and ignoring Sa’ar and Bennett, Likud is now targeting them and warning their right-wing voters that they will inevitably crown Lapid the winner.

“Bennett and Sa’ar have no government without Lapid as prime minister,” goes the new Likud campaign.

Bennett is more susceptible to such a campaign than Sa’ar, say sources in the Likud and New Hope.

According to some internal polls, a great many Bennett supporters are self-described right-wingers who would not willingly back a Lapid-led government.

It was that shift in Likud’s strategy, and Bennett’s concern for that vulnerable rightist support, that drove Bennett to announce on Wednesday that he would not serve under Lapid.

Shortly after Bennett’s announcement, Channel 12 political analyst Amit Segal threw another wrinkle into the mix. He claimed Bennett and Sa’ar were planning to unite their parties after the election in order to form a faction larger than Lapid’s, making them the most viable alternative to Netanyahu when the negotiations on forming a government begin.

Calls by The Times of Israel to informed sources suggest the union idea did not come from Sa’ar. Could Bennett have leaked the plan to Segal as part of his response to the new pressure from Netanyahu? Is Bennett trying to convince right-wing voters that they need not worry about their vote for Yamina being used to deliver a victory to Lapid?

Bennett’s pivot dramatically reshapes the race. Lapid has lost any viable coalition he may have had. If Bennett won’t serve under him, and Sa’ar and the non-Zionist Arab-majority Joint List won’t serve together at all, Lapid has no mathematical path to a government.

Yesh Atid MK Moshe Turpaz tried to dismiss such tea-leaf reading on Thursday, telling the Knesset Channel, Israel’s C-SPAN, that Sa’ar and Bennett are focused on keeping Netanyahu from siphoning away their support. “We’ve never counted on Bennett to be part of the non-Netanyahu bloc. We’ve always seen him as part of his own bloc.”

But if the numbers truly do not add up for Lapid as a viable replacement to Netanyahu, how many anybody-but-Netanyahu voters, seeking to back the candidate with the best chance of ousting the prime minister, will stick with him?

Bennett’s announcement, a tactical response to a tactical threat, wasn’t intended to shower support on Netanyahu, but rather the next-most-viable leader who isn’t Lapid.

Pundits lashed Bennett for abandoning his “kingmaker” status as the deciding vote between Lapid and Netanyahu. But Bennett appears to have chosen a third option: Sa’ar. Segal’s scoop on Wednesday night about the purported plan for a Bennett-Sa’ar unity slate after election day is another data point leaning in that direction.

Sa’ar has been asked many times in recent weeks how he planned to form a government that does not include Netanyahu and in which Lapid, who leads a larger faction, agrees to forgo the prime minister’s chair.

With Bennett’s pivot, that claim may have just become an undeniable reality.

This writer could uncover no evidence that Bennett and Sa’ar are directly coordinating their moves. Both seem to be responding to the pressure from Netanyahu, to the polls, to their own sense of their constituents’ expectations. Those factors, and their broad agreement on policy issues, seem to be pushing them slowly but inexorably toward each other.

Still, it seems curiously convenient and unexpectedly advantageous for Sa’ar that Bennett would publicly rob Lapid of his future coalition just as New Hope unveils its final campaign messaging, meant to sustain it through the home stretch.

Source: The Times of Israel