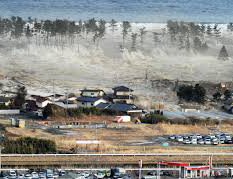 People in Japan are remembering those who were killed 10 years ago when a massive earthquake and tsunami struck northeastern Japan and triggered a nuclear catastrophe reports NHK.

A national memorial ceremony will be held later Thursday but those affected have already begun their own prayers.

The magnitude 9 quake generated a tsunami over 10 meters high, killing 15,900 people. 2,525 others remain unaccounted for.

People who lost loved ones returned to the ocean side early Thursday morning to remember them.

The city of Ishinomaki, Miyagi Prefecture, saw the highest number of deaths in the country, losing 3,971 people.

A man in his 40s in Ishinomaki said, "The tears started flowing when I came to this hill and remembered how I fled here while being chased by the tsunami. The homes and schools that I've been used to seeing since childhood are no more. It's sad, but I have to accept it."

Another man in Minamisoma City in Fukushima Prefecture lost his grandparents.

When the waves started coming, he couldn't get close to the house that they shared. And afterwards, nuclear radiation caused by the triple meltdown made it impossible to search for them.

He said, "My grandparents died, but I was saved. They were irreplaceable, and I am thankful that they gave me this life."

Abe's State Funeral To Be Held On Tuesday By Agencies 16 hours, 3 minutes ago

US-South Korea To Stage Joint Military Ddrills With Nuclear-powered US Carrier By Agencies 1 day, 16 hours ago

South Korea On Alert For Signs Of North's SLBM Launch By Agencies 2 days, 16 hours ago

Russian Officials Prepare To Hold Referendums In Ukraine By Agencies 4 days, 16 hours ago

UN Puts Spotlight On Putin By Agencies 5 days, 16 hours ago