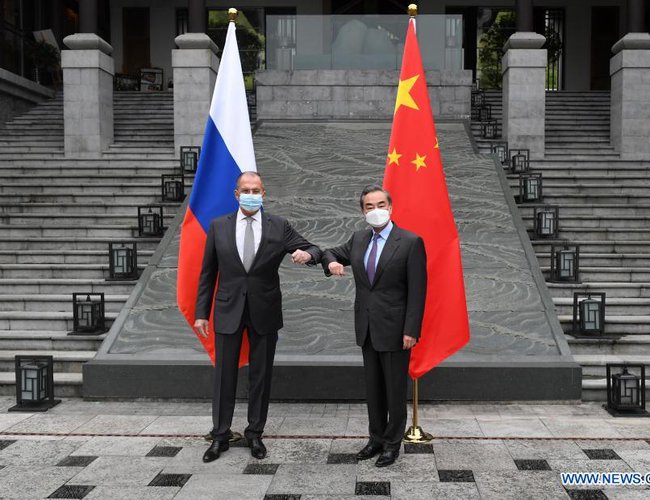 The two sides briefed each other on the latest developments of their respective relations with the United States, according to a press release issued after the meeting.

According to Chinese news agency Xinhua, the two foreign ministers said the international community believes that the United States should reflect on the damage it has done to global peace and development in recent years, halt unilateral bullying, stop meddling in other countries' domestic affairs, and stop forming small circles to seek bloc confrontation, said the press release.

It said the two ministers agreed that all countries should follow the purposes and principles of the Charter of the United Nations (UN), uphold true multilateralism, make international relations more democratic, and accept and promote peaceful coexistence and common development of countries with different social systems and development paths.

On the Iranian nuclear issue, the two sides believed that the United States should unconditionally return to the Joint Comprehensive Plan of Action (JCPOA) as soon as possible and revoke the unilateral sanctions against Iran, it said.

At the same time, they called on Iran to resume compliance and encouraged the JCPOA's due role in preventing nuclear proliferation, it said.

The two sides also proposed the establishment of a regional security dialogue platform to converge a new consensus on resolving the security concerns of countries in the region.

On the Afghanistan issue, the two ministers attached importance to various international efforts and hoped that all dialogue mechanisms related to Afghanistan will complement each other and truly embody the "Afghan-led, Afghan-owned" principle to accelerate the peace, reconciliation and reconstruction process.

The two ministers expressed deep concern about the current situation in Myanmar, said the press release.

They voiced the support for all parties in Myanmar to seek a political solution to the current crisis within the constitution and legal framework, avoid further conflict and bloodshed, prevent external forces from taking advantage of the crisis for their own gains, and continue to advance the democratic transition.

The two sides also coordinated positions on a wide range of issues such as UN reform, climate change, Asia-Pacific situation, Syria and Sudan. The two sides on Tuesday will continue talks on bilateral relations and international and regional situations, said the press release.

Russian Forces Claims Mariupol Steel Plant is Under Their Control By Agencies 1 day, 2 hours ago

COVID-19 Kills Over One Million In US By Agencies 4 days, 2 hours ago

Ukrainians Forces Continues Their Fighting Against Russians By Agencies 4 days, 2 hours ago