He added that he was also concerned by violent clashes between Israeli security forces in the West Bank and east Jerusalem as well as internal rioting. 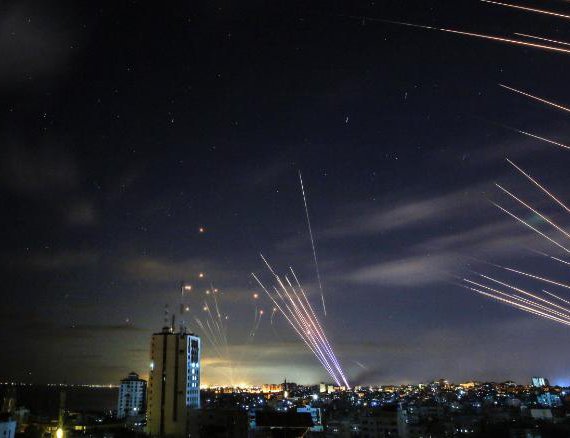 The United States blocked the United Nations Security Council from issuing a statement that called for an end to Israeli-Palestinian violence on Monday, but failed to condemn or even mention Hamas or the Gaza rockets.

At issue, he said, is whether such a statement “advances the prospects for ending the violence or not?”

The US would support any action that ends the violence, Blinken added, saying: “If we think that there’s something, including at the United Nations, that would effectively advance that, we would be for it.”

“Ultimately,” Blinken said, “it is up to the parties to make clear that they want to pursue a cease-fire.”

Netanyahu said after the meeting that “the instruction is to continue to strike terror targets. The IDF does it well...We will continue to act as much as necessary to bring back the quiet and security to all residents of Israel.”

Israel’s Security Cabinet convened on Sunday, and ministers decided to continue the operation in accordance with the IDF’s plans. No ceasefire plan was discussed, and Netanyahu and Gantz said they will bring one to the cabinet if it becomes relevant.

The UNSC met twice last week behind closed doors, but was prevented by the US from publishing a joint statement on the violence. A second attempt was made to reach consensus on a draft statement after a public meeting was held on Sunday with all 15 members. The US is one of five UNSC members with veto power.

Blinken told reporters on Monday that “We thought it was very important the other day to have this open discussion where the parties could put forward their views, their concerns, and be heard. And we’ll continue to look for ways to advance the goal that we have, which is ending the violence,” he said.

The White House press spokesperson Jen Psaki said, “Our approach is through quiet, intensive diplomacy and that’s where we feel we can be most effective.”

His country holds the rotating UNSC Presidency this month and said it would push again for a joint statement.

On Sunday Wang told the UNSC: “The Security Council shoulders the primary responsibility for safeguarding international peace and security. Regrettably, simply because of the obstruction by one country, the Security Council hasn’t been able to speak with one voice.”

UN Secretary-General Antonio Guterres said in Sunday’s UNSC meeting that the “United Nations is actively engaging all sides towards an immediate ceasefire. The hostilities have already caused unconscionable death, immense suffering and damage to vital infrastructure.” He spoke as Hamas barraged Israel with rockets for the seventh day in a row and the IDF launched counter strikes.

“I am appalled by the increasingly large numbers of Palestinian civilian casualties, including many women and children, from Israeli strikes in Gaza. I also deplore Israeli fatalities from rockets launched from Gaza,” Guterres said.

Israel has done its best to strike military targets and to minimize civilian harm, Israeli Ambassador to the US and UN Gilad Erdan said.

Erdan further charged that Hamas had called on Israeli Arabs to attack Jews, which had led to the ongoing rioting within sovereign Israel, which also included Jewish attacks against Arabs.

“You have two choices. You can create false moral equivalence – immoral equivalence – between the actions of a democracy that sanctifies life, and those of a terrorist organization that glorifies death, by calling for restraint on all sides, and failing to unequivocally condemn Hamas,” he said.

Or, Erdan said, “You can send a clear message to Hamas that the international community will no longer accept its strategy of turning Palestinian children into human shields, and using schools, hospitals and high rises to hide its terror machine. You can choose to support a more peaceful future by demanding the demilitarization of the Gaza Strip and insisting on an authority in Gaza that invests in the well-being of the people of Gaza, rather than in the destruction of the State of Israel. “

In the interim, the UN General Assembly plans to hold a debate on the matter this Thursday, at the request of the Organization of the Islamic Conference and the Arab group.

The Palestinians have historically had majority support in the 193-member body and no country has veto power at the UNGA. But the resolutions are declaratory in nature and do not carry the same weight as a UNSC resolution.

Foreign Minister Gabi Ashkenazi spoke with Blinken on Monday, thanking him for US support for Israel’s right to defend itself, including in the UN Security Council, and its condemnation of Hamas terrorism.

“Israel will continue to act against the terrorist organization Hamas until quiet is brought back,” Ashkenazi said. “The entire international community must denounce Hamas, which uses civilians as human shields...We thank our good friend the US for its strong support.”

A State Department readout of the call was not yet available at press time.

Netanyahu was expected to speak with US President Joe Biden after press time on Monday.

Earlier Monday, Ben-Shabbat and American National Security Advisor Jake Sullivan spoke. Sullivan tweeted that the US “is engaged in quiet, intensive diplomacy and our efforts will continue.”

EU High Representative for Foreign Affairs Josep Borrell announced on Sunday that he would convene a meeting of EU Foreign Ministers on Tuesday, “in view of the ongoing escalation between Israel and Palestine and the unacceptable number of civilian casualties.”

“We will coordinate and discuss how the EU can best contribute to end the current violence,” Borrell tweeted.

Netanyahu spoke with German Chancellor Angela Merkel on Monday. According to her office’s readout, she “again condemned the continued rocket attacks from Gaza on Israel and assured [Netanyahu] of the solidarity of the German government. [She] affirmed Israel’s right to defend itself against the attacks.”

Merkel also expressed hope that the fighting would end soon.

Netanyahu emphasized that Hamas is committing a “double war crime” by using civilian areas in Gaza as launching pads for strikes on Israeli civilians, the Prime Minister’s Office stated.

In light of recent antisemitic incidents in Germany, Merkel said her government “will continue to take decisive action against protests in Germany that spread hatred and antisemitism.”

Netanyahu thanked Merkel for her actions against antisemitism.

Netanyahu also spoke with Dutch Prime Minister Mark Rutte and thanked him for his support for Israel’s right to defend itself, saying Israel will continue to strike Hamas and Islamic Jihad to bring quiet and security back to Israeli citizens, while avoiding harming noncombatants as much as possible.

Rutte said after the phone call that he “stressed the importance of ending the fighting as soon as possible, and expressed my support for mediation efforts by Egypt and the United Nations in order to reach a ceasefire.”

“I condemned the rocket attacks on Israel,” he added. “Israel has the right to defend itself against these attacks, but precisely because it is a strong country, it also has a responsibility to act proportionately within the bounds of international law.”

Rutte called on both sides to avoid further escalation and civilian casualties among Palestinians and Israelis in calls with Netanyahu and Palestinian Authority President Mahmoud Abbas, and said they should prevent further confrontations in the West Bank. He also called on Israel not to evict Palestinian families from the Jerusalem neighborhood of Sheikh Jarrah/Shimon Hatzadik. A final ruling by the Supreme Court on the private property case between the Arab tenants and the Jewish landowners is pending.

On Friday, Netanyahu said Israel needs more time to succeed in Operation Guardian of the Walls, but hopes it won’t take long.

“The campaign against the terrorist organizations continues in full force,” Netanyahu said in a press statement soon after the cabinet meeting. “The IDF attacked more than 1,500 targets in recent days…The tunnels that were Hamas’s strategic asset turned into a death trap for terrorists.”

“By way of deception, war,” Netanyahu said, quoting the Mossad motto, which comes from the Book of Proverbs, “and through courage, we will win. It will take some time.”

Netanyahu said that Israel is facing some international pressure, but said that the US and President Joe Biden were foremost among many supporting Israel at this time.

Immediately after, asked in an interview with US TV’s Face the Nation how long the fighting will continue, Netanyahu said: “We hope it doesn’t continue very long.”

“We were attacked by Hamas on our national day, Jerusalem day, with unprovoked attacks on Jerusalem, thousands of rockets and missiles on our city. I think we have to defend ourselves; we have a natural right to self-defense. We are trying to degrade Hamas terrorist abilities, and degrade its ability to do this again,” he said.

Israel strikes high-rise buildings used by Hamas for terrorism without killing anyone, he pointed out.

“How does that happen? We, unlike Hamas, take special precautions to tell people to leave the premises and make sure everyone is gone before we take down the building…We call the building to make sure the premises are vacated,” he explained. “They deliberately target our cities and glorify the death of children and old people.”

When there are civilian casualties, Israel “grieves” and “regrets” them, Netanyahu said.

“Many studies by serious military analysts compared Israel’s actions with other Western armies fighting radical Islamists…There has to be a measure of fairness, reasonableness in projecting this kind of criticism against Israel. Our army is second to none in seeking to minimize civilian casualties,” he stated.

Hamas, however, intentionally targets noncombatants in Israel and is fine with civilian casualties in Gaza, because it brings international criticism of Israel.

“When the international community attacks Israel, they are encouraging Hamas to continue these attacks,” he said.

They demanded that the US administration make all efforts and exert pressure on the Israeli government to stop its military strikes on the Gaza Strip.

“Security and stability will be achieved when the Israeli occupation of the land of the State of Palestine and its capital, East Jerusalem, ends,” Abbas was quoted as telling the US envoy.

Gantz said that “the objective of the current military campaign is to restore long-term quiet to Israel’s borders and safety to its citizens.”

The defense minister’s spokesperson said he asked the American delegation to thank Biden for his support for “Israel’s right and duty to defend itself.”

Amr also met with senior figures in Israeli Arab society, who asked him to work towards an immediate ceasefire, Channel 12 reported.

Amr is the only Biden Administration appointee focused on Israeli-Palestinian issues. The administration has yet to announce an ambassador to Israel, nor an envoy for peace talks, which many presidents appoint.