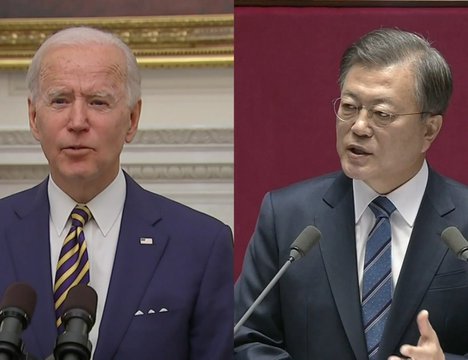 US President Joe Biden has held a summit with his South Korean counterpart Moon Jae-in in Washington. The two leaders were keen to tout the strength of their alliance and said they'll work together toward the denuclearization of the Korean Peninsula.

At a joint news conference, Biden said, "Our two nations also share our willingness to engage diplomatically with the DPRK to take pragmatic steps that will reduce tensions as we move forward. Our ultimate goal of denuclearization of the Korean Peninsula."

Moon said, "President Biden has expressed support for inter-Korean dialogue. South Korea will work to promote progress in inter-Korean relations through close cooperation with the United States and to create a virtuous cycle and dialogue between the US and North Korea."

The Biden administration recently completed a review of US policy toward the North, opting for a practical approach and the possibility of diplomacy.

Zelenskyy Meets With EU Leaders By Agencies 20 hours, 55 minutes ago