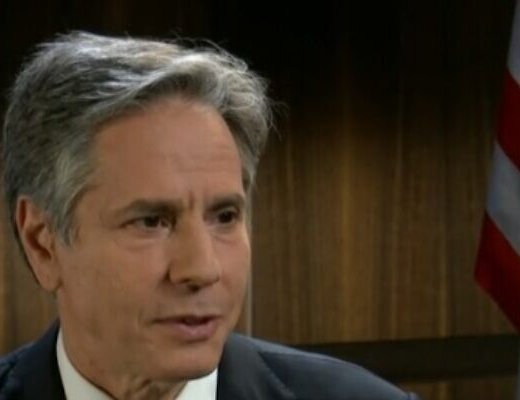 US Secretary of State Antony Blinken said Israel “took very significant steps” to avoid civilian casualties in Gaza during the recent fighting with Hamas, but lamented the loss of lives, “especially children,” while underscoring the Biden administration’s backing for a two-state solution for solving the Israeli-Palestinian process.

In an interview with Israeli television aired Wednesday, Blinken also stressed US President Joe Biden’s support for rejoining the 2015 international accord limiting Iran’s nuclear program if Tehran returns to compliance with the deal, which Prime Minister Benjamin Netanyahu opposes.

Blinken spoke with Channel 12 news while visiting Israel to shore up the ceasefire reached last week to end the 11 days of hostilities between the Israeli military and Hamas, the Islamist terror organization that runs the Gaza Strip. He also visited the West Bank, Egypt and Jordan during his tour of the region.

In the interview aired Wednesday night, America’s top diplomat reiterated Biden’s commitment to Israel’s security, when asked about opposition among progressive Democrats in Congress to a sale of precision-guided missiles to Israel.

“President Biden has been absolutely clear, and he’s been clear on more than one occasion: We are committed to Israel’s security, period. We will make sure that Israel has the means to defend itself,” he said.

Blinken said this was “particularly” the case in light of the “attacks from a terrorist group indiscriminately targeting civilians,” saying “we want to make sure that Israel has the means to deal with that.”

A Palestinian woman walks past a destroyed building in the al-Rimal commercial district in Gaza City on May 22, 2021, following a ceasefire between Israel and Palestinian terror groups. (Emmanuel Dunand/AFP)

He stressed though that as a democracy, Israel has an “extra burden” to avoid civilian casualties when responding to attacks targeting Israeli citizens. The interviewer, news anchor Yonit Levi, asked Blinken if Israel sought to avoid hitting civilians while striking in Gaza during the recent conflict.

“I think Israel took very significant steps to do that, but we also know that on both sides men, women, and especially children were lost, and I think that’s deeply painful, and it’s a reminder that we throw around numbers, statistics, but these statistics, these numbers can’t hide the fact that we’re talking about real human beings,” he said.

The latest military confrontation with Hamas ended in a ceasefire early Friday. It began on May 10 when Hamas launched a massive rocket barrage on Israeli cities, sparking IDF retaliatory strikes and 11 days of fighting, leaving 13 dead in Israel and over 240 fatalities in Gaza. The Israeli army said most of those killed in Gaza were terror combatants.

Blinken said he believed there was “a lot of work” needed to “rebuild some confidence, to try to rebuild some trust,” before seeking to restart Israeli-Palestinian peace talks.

“We continue to believe very strongly that a two-state solution is not just the best way, but probably the only way to really assure that going forward, Israel has a future as a secure Jewish and democratic state, and the Palestinians have a state to which they’re entitled,” he said.

The current focus, however, was “trying to build on the ceasefire, address the immediate needs and concerns,” according to Blinken, before seeing “if over time the conditions are such that there’s a better environment for trying to pursue a two-state solution.”

Turning to the ongoing nuclear talks in Vienna on restoring the 2015 Iran nuclear deal, which the US is taking part in indirectly, Blinken said “the jury is still out” on whether the Islamic Republic is willing to reverse its breaches of the deal since then-president Donald Trump withdrew America from the agreement in 2018. Biden has repeatedly said the US will return to compliance with the deal if Iran does.

Blinken acknowledged differences with Israel over how to prevent Iran from an atomic bomb, but insisted the countries were united in opposing such a prospect.

“We are joined in that goal and in that commitment. It’s also no secret that over time we’ve had differences over the best way to get there, to make sure that Iran does not get a weapon,” Blinken said.

While meeting Tuesday with Netanyahu, the premier told Blinken he hopes the US does not return to the JCPOA in its current form, arguing it will allow Iran to acquire nuclear arms.

The secretary of state argued the nuclear deal was doing “exactly what it set out to accomplish,” saying Iran would have needed at least a year to produce enough material for an atomic weapon before Trump pulled out. Now Iran could obtain sufficient material in a “very short order,” he said.

“And so far from getting less dangerous without the deal, it’s gotten more dangerous,” he warned.

If the deal is restored, Blinken said the Biden administration will seek to make it “longer and stronger” and to also address Iran’s “destabilizing activities in the region, proliferation of weapons, support for terrorist groups, et cetera.” He added this could include an extension of the so-called sunset clauses, which allow Iran to begin resuming some nuclear work when they start expiring in 2025.

In this image made from April 17, 2021, video released by the Islamic Republic Iran Broadcasting, IRIB, state-run TV, various centrifuge machines line a hall at the Natanz Uranium Enrichment Facility, Iran. (IRIB via AP)

Blinken, whose stepfather was a Holocaust survivor, was also asked about the antisemitic incidents in the US amid the fighting in Gaza.

“It’s profoundly, profoundly disturbing. And we have seen, not just in the last week although we’ve seen – well, actually, we have seen a very disturbing eruption of antisemitic incidents,” he said. “And so when I see that I feel it both on a very personal level, but I also see it as a warning sign, a signal that there are – things are happening that we have to address.”

He was also asked if comments by “known figures on the far left” in the US calling Israel an apartheid state could fuel antisemitism.

The Israeli network also asked Blinken if Biden was planning a trip to Israel.

Blinken replied that he had no information on such a trip, but said Biden “very much looks forward to coming back.”

Japan To Lower COVID-19 Classification On May 8 By Agencies 4 hours, 11 minutes ago