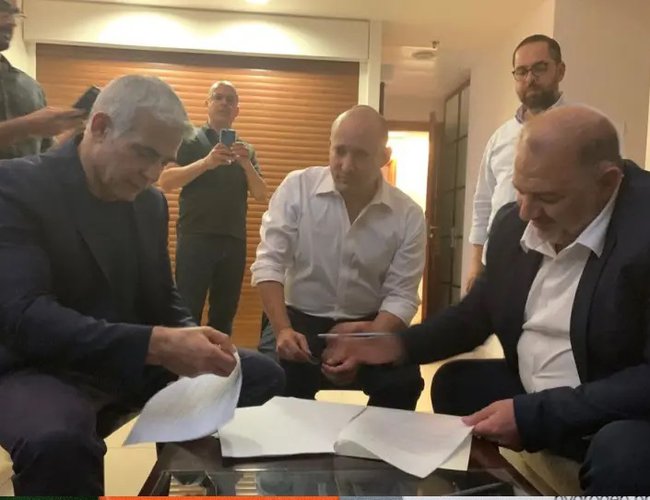 "I commit to you Mr. President, that this government will work to serve all the citizens of Israel including those who aren't members of it, will respect those who oppose it, and do everything in its power to unite all parts of Israeli society," Lapid told Rivlin at 11:35 p.m.

The Southern Islamic Movement's Shura Council decided in Kfar Kassem on Wednesday night to empower Abbas to make a final decision about whether to enter the coalition, based on his conversation with Bennett and Lapid.

"The decision was hard and there were several disputes but it was important to reach agreements," Abbas told reporters after singing the deal.

Another coalition deal was signed with the New Hope Party. The deal guarantees splitting the role of the attorney-general, preventing Palestinian construction in Israeli controlled Area C of the West Bank and legalizing the usage of cannabis. The party received the Justice, Education, Construction and Communications portfolios.

Another dispute appeared to be on the way to a compromise after Bennett's number two in Yamina, MK Ayelet Shaked, accepted a rotation in the Judicial Selection Committee with Labor leader Merav Michaeli. According to the compromise, Shaked would serve on the committee in the first half of the term, along with an MK from Labor, and Michaeli in the second half, along with an MK from New Hope.

But Michaeli then demanded to go first in the rotation, which Shaked requested. One way of resolving the dispute that was discussed is a rotation of portfolios in the second half of the term, with Shaked becoming justice minister, New Hope leader Gideon Sa'ar shifting from the Justice to the Foreign Affairs portfolio and Bennett moving from prime minister to interior minister and alternate prime minister when Lapid becomes prime minister. Michaeli could also be promoted in that scenario.

Michaeli and Lapid met late Wednesday night just ahead of the deadline.

The judicial selection committee is due to select six new Supreme Court judges over the next four years. It automatically includes the justice minister, who will be New Hope leader Gideon Sa'ar, one additional minister, an MK from the coalition and one from the opposition. There are also representatives from the current Supreme Court and the Bar Association.

Michaeli said late Tuesday night that she accepted the agreement that gives Shaked the right to serve in the selection committee first. In return, Labor received the chairmanship of the Knesset Law and Constitution Committee. She said she was proud to make history in ousting Netanyahu.

Shaked was not the only MK in Yamina causing problems. MK Nir Orbach, who has been touted as a possible coalition chairman, was undecided about whether to vote for the government in the minutes before the deadline.

Orbach and Bennett met late Wednesday night after the coalition was announced. The meeting was positive, according to Yamina, and they will hold another one Thursday.

Lapid needed to tell President Reuven Rivlin and Knesset Speaker Yariv Levin by Wednesday night at 11:59 that he can form a government. Had he not done so, the mandate would have gone to the Knesset, where any MK had the opportunity to build a coalition with the support of 61 MKs.

A source close to Lapid said that even if details remain unresolved, Lapid would still tell Rivlin he had formed a government and allow the remaining issues to be dealt with before the new government gets approved in the Knesset.

Lapid had wanted to inform Levin that he had formed a government during Wednesday's Knesset session, in order to make sure the Knesset speaker would schedule a vote of confidence in the new government and the swearing in of the new ministers by next week.

But final deals were not reached in time. It is expected that once Levin receives word from Lapid that a government is ready, he will insist on waiting as long as permitted by law in order to maximize pressure on Yamina MKs, which could end up being 12 days.

Marathon talks among representatives of the eight parties set to join the coalition at the Kfar Hamaccabiah Hotel finalized coalition agreements with every party overnight Tuesday night, concluding with a deal with Blue and White. A Blue and White spokeswoman said they agreed upon a number of central policy areas to advance and strengthen democracy and Israeli society at large.

While many celebrated the new change coalition, others expressed criticism and disdain over the decision.

"When the personal meets the national. I could not have wished for a bigger birthday present," Barlev tweeted.

She captured the celebration on a live Facebook feed in what she said was a "personal moment, which became national," when a few friends came to celebrate her birthday and the new coalition was announced.

"What a jump we made tonight. Wow," she wrote.

"Congratulations to [Yair] Lapid, [Naftali] Bennett, and [Gideon] Sa'ar, the leaders of the change coalition, for the completion of this important stage on the way to putting the country back on its tracks," he tweeted.

Meretz leader Nitzan Horowitz also congratulated the party leaders, tweeting, "Congratulations to all our partners in the new coalition. To the government that is on the way!"

Defense Minister Benny Gantz tweeted from the airplane on his way to the United States that Wednesday night was a "night of great hope." He congratulated the change bloc and wished Israel good luck with its new government.

"I am going now to the US for a very short and important meeting. I am convinced that I will be able to address Israel's security there, and that we will be able to finally form a change government that will work for the unity and healing of Israeli society," he said.

Prime Minister Benjamin Netanyahu has yet to respond to the news.

"So the Arabs of Israel collaborated with Hamas, revolted and carried out programs against Jews backed by their political leadership, and will now receive reinforcement and an irresponsible chain of rewards that will encourage them to continue in the same way," Smotrich tweeted on Wednesday night, referencing the support given to the new coaliton by Ra'am Party leader Mansour Abbas.

"The blood of Jews that will God forbid be shed as a result will be on the hands of whoever will vote for this government," he added.

"I managed to form a government with supporters of terrorism. Yours, Naftali Bennett," Ben-Gvir sarcastically tweeted of Bennett's decision to join the change coalition.

Coalition Chairman Miki Zohar (Likud) also expressed his disappointment, as he tweeted, "The Left celebrates, but this is a very sad day for the State of Israel."

He called out Yamina head Bennett, New Hope leader Sa'ar and Yamina No. 2 Ayelet Shaked, saying they should be embarrassed for agreeing to join the change bloc.

US Shoots Down China's Balloon, Says Defense Department By Agencies 21 hours, 15 minutes ago