Christian Eriksen 'fine under circumstances' after cardiac arrest at Euro 2020

Christian Eriksen 'fine under circumstances' after cardiac arrest at Euro 2020 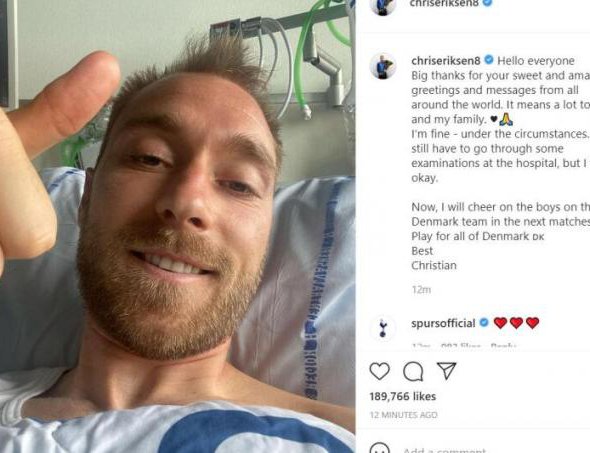 Christian Eriksen says he is "fine under the circumstances" and posted a picture from his hospital bed with a thumbs-up as he made his first comments since suffering a cardiac arrest.

The Denmark midfielder, 29, collapsed in Saturday's game with Finland and had to be resuscitated on the pitch.

Eriksen has thanked fans from around the world for their support.

"Now, I will cheer on the boys on the Denmark team in the next matches," he wrote. "Play for all of Denmark."

The Inter Milan playmaker is now in a stable condition in a Copenhagen hospital.

"Big thanks for your sweet and amazing greetings and messages from all around the world," he added. "It means a lot to me and my family.

"I'm fine - under the circumstances. I still have to go through some examinations at the hospital, but I feel OK."

Defibrillators must be accessible across all football, says campaigner

Eriksen had to be resuscitated on the pitch after collapsing shortly before half-time in Saturday's match in Copenhagen.

Denmark's team doctor Morten Boese said: "How close were we to losing him? I don't know, but we got him back after one defib [defibrillation] so that's quite fast.

"The examinations that have been done so far look fine. We don't have an explanation to why it happened."

Only when they were informed that Eriksen was awake in hospital did the players agree to resume the match, with play restarting almost two hours after the former Tottenham player collapsed.

Finland won 1-0 and Denmark forward Martin Braithwaite has said the decision to resume the match was the "least bad one".Denmark coach Kasper Hjulmand later said the game should not have restarted, while former goalkeeper Peter Schmeichel said it was "absolutely ridiculous".

Hjulmand added: "Christian is in good spirits and it's a huge relief for the players after all this uncertainty. There is no doubt that we have been on the ropes."

Denmark play their second Group B game against Belgium on Thursday (17:00 BST), also in Copenhagen.

Head coach Kasper Hjulmand said: "I have said that Eriksen is the heart, the pulse, the rhythm of our team. He has an incredible ability to perceive time, space and rhythm in a football match, [but] he won't be there on Thursday.

"We have a lot of other players who can contribute, and skilled players who can also find the rhythm of the match. We are putting something together that will be difficult for Belgium - I'm sure of that."

On the rest of the team, he added: "It's totally OK if someone does not have the emotions needed to not give everything in the game. We need to prepare for an emotional trip to Parken.

"It will be a special atmosphere. We have to prepare mentally, the players are used to that. What are some of the emotions that can hit us? It's going to be weird to come back, we're going to be met with a lot of emotions."

CAN Lifts Suspension Of Leg-spinner Lamichhane By NEW SPOTLIGHT ONLINE 2 days, 18 hours ago