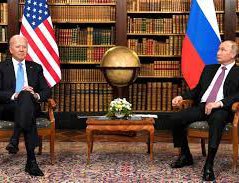 The presidents of the US and Russia have praised their talks in Geneva but have made little concrete progress at the first such meeting since 2018.

Disagreements were stated, said US President Joe Biden, but not in a hyperbolic way, and he said Russia did not want a new Cold War.

The talks lasted around three hours, less time than was scheduled.

Mr Biden said they did not need to spend more time talking and there was now a genuine prospect to improve relations with Russia.

As a gift to the Russian leader, Mr Biden brought Mr Putin a custom-made pair of aviator sunglasses, a style favoured by the US president, and a crystal sculpture of a bison. It is unclear whether Mr Putin gave Mr Biden a gift. In 2018, the Russian leader gave former President Donald Trump a soccer ball after a meeting in Helsinki, Finland.

The two sides agreed to begin a dialogue on nuclear arms control. They also said they would return ambassadors to each other's capitals - the envoys were mutually withdrawn for consultations in March, after the US accused Russia of meddling in the 2020 presidential election.

However, there was little sign of agreement on other issues, including cyber-security, Ukraine and the fate of Russian opposition leader Alexei Navalny, who is currently serving a two-and-a-half-year sentence in a penal colony.

Mr Biden said there would be "devastating consequences" for Russia if Navalny died in prison.

Before the summit, both sides said relations were at rock bottom.

Mr Putin hinted at a possible deal on exchanging prisoners, saying he believed compromises could be found. On cyber-attacks, Mr Putin brushed away accusations of Russian responsibility, saying that most cyber-attacks in Russia originated from the US.

Mr Biden said he told Mr Putin that critical infrastructure, such as water or energy, must be "off-limits" to hacking or other attacks.

"I looked at him and said how would you feel if ransomware took on the pipelines from your oil fields? He said it would matter," Mr Biden said, adding that if Russia violated these "basic norms" the US would retaliate.

The two sides differed sharply on human rights, including the right to protest.

He said Navalny had ignored the law and knew he would face imprisonment when he returned to Russia after having sought medical treatment in Germany. Navalny says he was poisoned with a nerve agent on Mr Putin's orders - an accusation Mr Putin denies.

He said Russia did not want disturbances on its territory comparable to the Capitol riots or the Black Lives Matter movement.

Mr Biden dismissed Mr Putin's comments about Black Lives Matter as "ridiculous", and said human rights would "always be on the table".

US President Joe Biden and Russian President Vladimir Putin have met face-to-face at a summit in Geneva. They both said the tone of their meeting was positive.

Biden and Putin met for three hours at a villa overlooking Lake Geneva. Putin said they agreed to resume talks on controlling nuclear weapons. And he said ambassadors for both countries will return to their posts.

Still, some tensions were evident. Biden said they had discussed the imprisonment of Russian opposition leader Alexei Navalny.

Putin dismissed concerns about Russia's annexation of Ukraine's Crimean Peninsula. He denied responsibility for recent cyberattacks on US companies and infrastructure.

Ukraine welcomes US Offer Of Long-Range Rockets By Agencies 5 hours, 23 minutes ago

US Shoots Down China's Balloon, Says Defense Department By Agencies 5 hours, 38 minutes ago