Iran's President-elect: US Must Lift Sanctions

Iran's President-elect: US Must Lift Sanctions 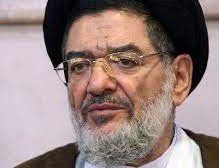 Iran's president-elect Ebrahim Raisi has called on the United States to lift sanctions on his country.

Raisi referred to negotiations with the US aimed at reviving the 2015 nuclear agreement.

He said it was the US that breached the deal, and that Washington should lift all sanctions on Iran.

Raisi ruled out the possibility of meeting with US President Joe Biden or holding negotiations over Iran's ballistic missile program.

He said Iran's foreign policy would not be limited to the nuclear deal and that his country is willing to improve ties with other countries.

Raisi was also asked about his alleged past involvement in a crackdown on anti-government protests. He defended himself, saying he has protected human rights in every position he has held.

Raisi is scheduled to take over as president from the incumbent, Hassan Rouhani, in August. The president-elect will face the challenge of dealing with the US sanctions, which have crippled the country's economy.

Zelenskyy Meets With EU Leaders By Agencies 20 hours, 29 minutes ago