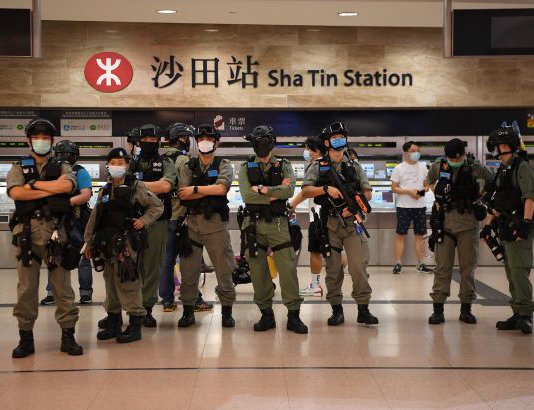 Security authorities in Hong Kong have intensified their crackdowns on political and media activities since the introduction of the national security law one year ago.

The law that went into effect on June 30 last year targets secession, subversion or collusion with a foreign country or external elements to endanger national security.

Police said they had arrested 117 people suspicion of violating the law as of Tuesday.

Of those arrested, 64 are standing trial. They include people who took part in unofficial primaries for a postponed Legislative Council election.

Security officials have also indicted the founder of the Apple Daily, Jimmy Lai, and senior staff members of the newspaper which was critical of the Chinese government.

The paper issued its final edition last Thursday and ended its 26-year history, after its assets were frozen.

A large-scale prodemocracy rally has been held on July 1 every year to coincide with the anniversary of Hong Kong's handover to China from British rule.

But authorities banned the rally, citing restrictions in force for the coronavirus pandemic.

Chinese and Hong Kong flags are hanging throughout the territory ahead of a ceremony to be held in Beijing on Thursday to mark the Chinese Communist Party's centenary.

The Hong Kong government is believed to be trying to stimulate patriotism and stresses that the security law has helped bring stability.

Ukrainian Soldiers Arrive In Britain For Tank Training By Agencies 9 hours, 2 minutes ago