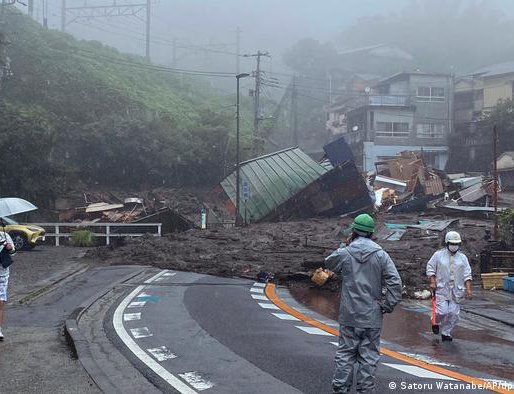 Rescue crews in Shizuoka Prefecture in central Japan are expanding efforts to search for survivors of this weekend's deadly mudslides.

The mayor of Atami, a bayside resort city in the prefecture, says 113 people remain unaccounted for.

Earlier, rescuers carefully passed a baby wrapped in a blanket to an emergency worker. The infant and her mother were rescued from a building which had its first floor buried in mud. Neither suffered any major injuries.

Prefectural officials say the torrents of mud washed away at least 130 homes and buildings in Atami on Saturday. Twenty-three people trapped by the deluge were rescued over the weekend. Three people are confirmed dead.

They've confirmed the whereabouts of 102 people and are working to find out the condition of the rest.

Ukrainian Soldiers Arrive In Britain For Tank Training By Agencies 10 hours, 43 minutes ago