Sifan Hassan's audacious bid for gold in the 1,500 metres, 5,000 metres and 10,000 metres at the Tokyo Games must rank as one of the boldest in the history of track and field. 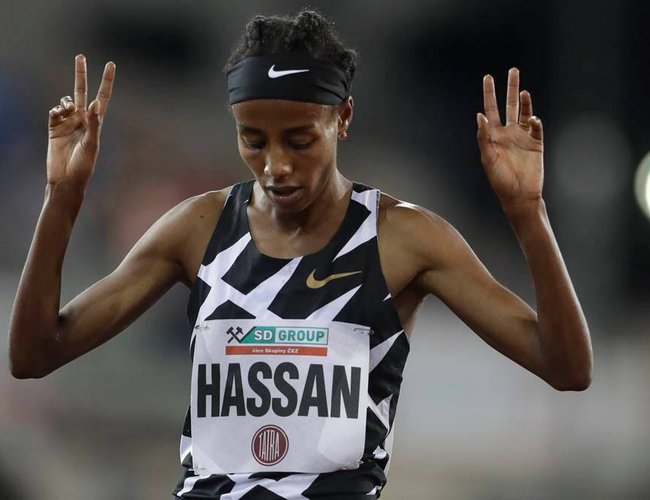 From travelling from Ethiopia to The Netherlands as a refugee at the age of 15 to making headlines by becoming the European Under-23 champion, just nine days after being allowed to compete for her adopted country.

Two gold medals at the World Championships in Doha two years ago – in the 1,500 metres and the 10,000m – made her a star. No woman or man had won gold at a single major competition in these demanding, but vastly different, events.

Now Sifan Hassan is willing to push the boundaries once again.

Hassan’s name features in the entry list of all three events, the first of which is the women’s 5,000m heats on Friday, the opening day of track and field competitions at the Olympic Stadium in Tokyo.

She will have no respite. She will run six races in nine days, including heats and finals. The heat and humidity of Tokyo and predicted thunderstorms will make the cycle of running, recovery, and running again even more difficult.

“I say life is not about medals, it is not about gold, it is also about history. I made the decision to run the 1500m (in Doha) even though I didn’t know if it was possible because nobody before had done it (the 1500m &10,000m double),” Hassan said earlier this month.

Michael Johnson, the 200 and 400- metre legend, took one look at the schedule and tempered down predictions of a gold rush. “It’s a lot, but seems doable for her. Not sure about gold in all three though,” he tweeted.

There’s a reason Johnson is being pragmatic.

At the Monaco Diamond League just over a fortnight ago, Hassan was overtaken on the home stretch. Kenya’s Faith Kipyegon, the Olympic Champion, outran her after the final bend. Hassan, visibly struggling to maintain her running shape, finished second, nearly 20 metres behind Kipyegon as the latter posted the fourth fastest time ever, 3 minutes, 51.07 seconds. The Tokyo Games were to start soon after the Diamond League in the French principality, lending the outcome of the race added significance.

The loss to Kipyegon and the gruelling schedule would have deterred lesser athletes from running the three tough races. But Hassan’s range makes her special.

The historic double at Doha was proof of her versatility. The 1,500m takes less than four minutes to finish, the 10,000m about 30 minutes.

Now that she has added the 5000m, it won’t be a canter to gold or even the podium.

If Kipyegon has laid down the marker in the shortest of the three races, Ethiopian Letesenbet Gidey, the world record holder, noses ahead as the favourite in the 10,000m. Gidey and Hassan have been rewriting world records in the build-up to the Olympics.

In the first week of June, Hassan improved Almaz Ayana’s previous mark by 10 seconds, clocking 29:06.82. She lapped athletes on the track and improved her previous best by 30 seconds.

A record by this margin is expected to stand for a while. But with athletes of the calibre of Gidley around, it didn’t last even a week. Two days later, on the same track in the Dutch city of Hengelo, Gidley finished in front with 29:01.03.

To put their astounding feats within 48-hour of each other in context: the record was untouched from 1993 to 2016 before Ayana bettered it at the Rio Olympics. Hassan’s feat, and then Gidley’s, was celebrated but the chatter moved to how technologically-advanced super spikes are aiding athletes run faster than before. At Tokyo, the debate over the help athletes gain from their footwear will continue, so will the thrilling battle between Hassan and Gidley in the 10,000m.

There will be no Gidley in the 5,000 as she has skipped the event despite being the world record holder. Yet Hassan can’t breathe easy. Five of the athletes set to race in Tokyo are among the top-10 fastest ever over the distance.