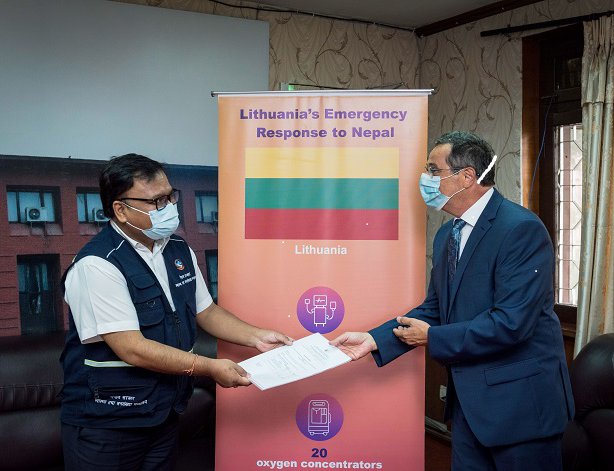 A consignment of medical equipment and supplies from Lithuania to support Nepal's fight against the COVID pandemic was handed over today to the Ministry of Health and Population.

The consignment was dispatched through the EU Civil Protection Mechanism. The support of the 13 EU Member States that have extended medical support to Nepal including Lithuania in the recent months around Euro 12 Million (NPR 1.7 billion).

According to a press release issued by the Delegation of the European Union to Nepal, Lithuania is one among the 13 EU Member States –Spain, Finland, France, Belgium, Germany, Slovenia, Austria, Malta, Denmark, Ireland, Italy and Hungary responding to Nepal’s call for assistance.

Nepal had appealed to the international community for support of medical equipment and supplies to fight a severe outbreak of the Corona Virus on 10 May. 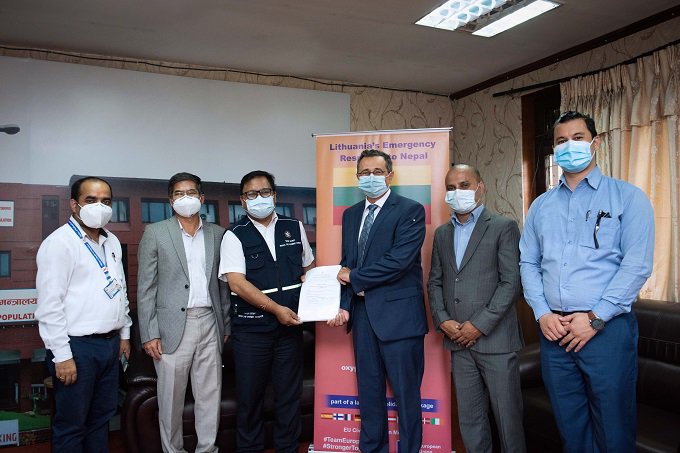 The medical supplies contributed by Lithuania include 5 breathing machines (mechanical ventilators) and 20 oxygen inhalers from the state reserve, which is administered by the Ministry of Health of Lithuania. The total value of the humanitarian aid provided to Nepal amounts to almost Euro 50,000 (NPR 7.08 million)

“Lithuania stands with the people of Nepal through these testing times. Solidarity and joint efforts are crucial in the fight against the pandemic,” said Ambassador of Lithuania to Nepal Julius Pranevičius.

“The European Union and its Member States have shown that they are indeed a very close friend of Nepal through the donation of life-saving medical equipment and supplies during times of dire need. We will continue to step up efforts to assist Nepal and its citizens in the days ahead enabling them to be healthier and safer,” said Stephane Maicon, charge d'affaires & Deputy Head of EU Delegation to Nepal.

Alongside other donors, the EU has been monitoring the distribution and the use of the supplies across the country.

The recording of the number of supplies entering the country and quantities moving out from the Humanitarian Staging Areas in Sinamangal is done in the Logistic Management Information System (eLIMS) of the MoHP.