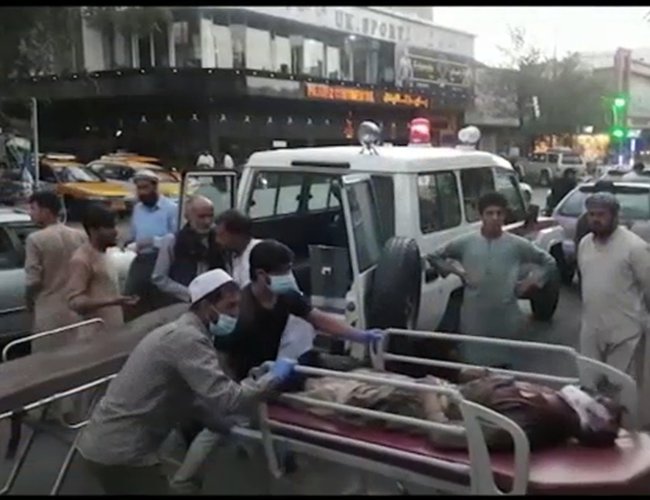 Afghanistan's capital continues to be in chaos as people scramble to flee the country and the Taliban. Two major explosions near Kabul's airport on Thursday killed more than 70 Afghans and 13 US military personnel.

However, evacuation flights from Afghanistan resumed with new urgency on Friday, a day after two suicide bombings targeted the thousands of desperate people fleeing the Taliban takeover and killed more than 100. The U.S. says further attempted attacks are expected ahead of the Tuesday deadline for foreign troops to leave, ending America’s longest war.

The attacks happened outside a crowded airport gate where US and British forces were stationed. Several gunmen reportedly fired shots, adding to the turmoil.

A news agency linked to the Islamic State militant group published a statement saying a regional affiliate of the group known as ISIS-K claimed responsibility for the attacks.

The deteriorating security situation is causing panic among Afghans.
One man says "It was a really heartbreaking incident for Afghans. If the present situation continues, many people will flee to neighboring countries."

Kabul was quiet on Friday, a holiday. But Taliban fighters are on high alert against further attacks. They appear to be intensifying security near the airport.

A Taliban official told Turkish media on Thursday the group condemns the attacks and blamed the presence of foreign troops.

Abdul Qahar Balkhi says "Targeting innocent civilians is an act of terrorism that has to be condemned by the entire world. It is because of the presence of foreign forces that such attacks take place."

He said the Taliban will ensure security at the airport and surrounding areas after foreign forces leave.

Japan's Self-Defense Force aircraft ferried a Japanese national to Pakistan on Friday, marking the first evacuation flight of their mission.

The Japanese government had been trying to evacuate up to 500 people, mostly Afghans working for the Japanese embassy and international organizations along with their families. But those people were unable to reach the airport in Kabul.

Officials had effectively set a Friday deadline for their evacuation mission. Foreign Ministry officials and SDF personnel sent for the operation have left Afghanistan.

European governments including Germany, Poland, Belgium and the Netherlands have announced the end of their evacuation flights.

Merkel said "We will not forget those people who could not be rescued by the air bridge. Rather, we will do everything we can to enable their evacuation."

US President Joe Biden says his nation will not be deterred by terrorists. He added the evacuation plan will continue, even after the completion of the US military withdrawal at the end of the month.